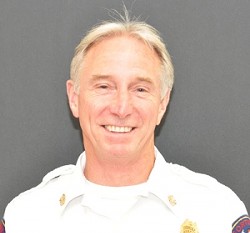 A local fire chief and reporter are in a bit of a standoff over comments left on a blog about the fatal fire that took the life of Martha Ann Robertson in the early hours of July 11. Robertson, 76, was a resident of Royal Crest Mobile Estates in Fortuna, CA and apparently perished due to smoke inhalation after firefighters were unable to rescue her from her mobile home, which was allegedly packed with belongings, making entry and exploration difficult. The cause of the fire is still under investigation but it is believed to have been accidental.

The comments on a local news blog, Redheaded Blackbelt, have caused a mini-controversy after Fortuna Fire Chief Lon Winburn asked that site’s owner, editor and reporter, Kym Kemp, to remove his press release regarding the fire. In an email sent July 13 (two days after the fire), Winburn wrote Kemp the following:

“Please remove our media release regarding the fire in Royal Crest from your site, we do not want any association with the comments that are being allowed to be posted.”

The comments Winburn referenced appear to be a collection of readers speculating on why the fire department was unable to save Robertson, questions as to why the crew did not have proper water pressure at the park and accusations of incompetence directed at Winburn. This kind of amateur sleuthing in comment forums is nothing new, of course, but Winburn took it to heart.

“I was not happy that she allows what was posted to be posted,” he told the Journal. “It’s because of the effect it has on my firefighters. My firefighters busted their butts to get into that house. When you have a fatality, it really hurts.”

Winburn said his firefighters often struggle with symptoms of Post Traumatic Stress Disorder after incidents, especially when there’s a death. The negative comments and speculation online were compounding that problem.

Many of the allegations included in the comments, and emailed to Kemp, included rumors that the Fortuna Fire Department didn’t have sufficient personnel on scene and that the department’s water tender wasn’t properly supplied to put out the blaze. Winburn conceded there were water pressure issues in the park but said the heavy fuel load in the residence and obstructed entry points were the biggest factors.

Allegations that the department had been unprepared for the flames are untrue, said Winburn, adding that the fuel load in the house made the size of the fire “abnormal.”

“Because of the materials, we could not get to the fire,” said Winburn. “The environment in that house was super charged with heat. We’re talking about materials 5 to 6 feet tall.”

Scanner calls from the incident indicate that there were issues getting enough water to the scene. The first report was at 5:15 a.m. At 5:20 a.m. a firefighter on scene advised an incoming vehicle that there was a fire hydrant “on the left” within the park. But at 5:48 a.m. Winburn, acting as incident commander, asked another incoming vehicle to find a hydrant outside the park.

Winburn said the park, which has been in existence for 40 years, operates on a separate water system than the city of Fortuna but this had been the first such incident and the park had been in compliance with hydrant testing. Royal Crest did not return calls from the Journal. Winburn added that he would follow up with the park’s owners.

Winburn added that it had been a difficult couple of years for the Fortuna Volunteer Fire Department which lost Capt. Tim Smith in September of 2016 in a fatal shooting and, in January of 2015, battled a giant blaze that changed the face of the small city’s Main Street. Winburn said his job is to protect his crew, whether it’s from the existential threat of a burning building or the psychological threat of having their lifesaving efforts picked apart after they've tried, and failed, to save someone.

To that end, he said, he asked Kemp to remove his press release from her site and, after the two could not reach accord in phone conversations, said he would not send her future press releases. Kemp, responding in an email, said she respected Winburn and his crew for their "hard and dangerous work” but that blacklisting her Redheaded Blackbelt is “inconsistent with the responsibilities that a public agency has to the citizens of our community.”

“Public input and comment is an important element of this service to our community,” Kemp’s email continued. “The comments posted by the public represent the opinion of the individuals that respond and not necessarily ones that I support.”

Journal calls to Fortuna City Manager Mark Wheetley were not returned. Kemp said she had been in touch with City Clerk Siana Emmons, who told her the fire department acts independently of the city.

Winburn said that while the two had not come to an agreement on the issue, the conversation was ongoing and he hadn’t outright decided not to send her future releases.

It is common media policy not to retroactively remove or edit past coverage. Whether or not comments should be edited to temper hate speech and inaccuracy has been a subject of debate both nationally and locally.

Kemp said she was "reluctant" to push the issue legally.

"Fire departments struggle to get money and they should not have to spend money on something that has nothing to do with fighting fires and providing medical care," she said.

Winburn added that Kemp is obviously very passionate about her job and that he was also not an expert on journalism or media, but is committed to protecting his community and his crew.

A better understanding of what exactly happened at the Royal Crest incident may be forthcoming after the investigation concludes. In the meantime, Winburn wanted Humboldt County residents to know that, thanks to a generous donation from a community member, the department has a storage unit full of smoke detectors, which firefighters are willing to install for free.