The July 18 vote by the Eureka City Council to allow City Manager Greg Sparks to negotiate a lease agreement for the property at 139 Y St. formerly known as the Multiple Assistance Center. The MAC, which has been used as a transitional facility for homeless folks, will see a new incarnation as Waterfront Treatment Services, a detox and residential treatment facility for people struggling with addiction. The facility will be managed by the Redwood Coast Action Agency and Alcohol Drug Care Services. St. Joseph Hospital, under Providence St. Joseph and the Well Being Trust, recently administered a $1.6 million grant to sponsor "the first and only dual-diagnosis, medical detoxification and residential treatment facility in the county" for its first 18 months.

John McManus, who helms ADCS, has been trying for several years to implement a medically-based detox in Eureka. ADCS's current detox center relies on St. Joseph Hospital to medically assess patients and clear them before they're admitted to treatment. Withdrawal from some drugs, including alcohol, can be fatal or life-endangering and require medical intervention. Drug MediCal, a program covered under the Affordable Care Act, offers reimbursement for these services. His efforts to get ADCS services and medical detox covered under MediCal were hampered by infrastructure problems in ADCS buildings, many of which were built in the 1930s and could not be brought up to compliance to be eligible for MediCal.

"It’s finally happened," McManus told the Journal. "The way it’s come together is better than I could have ever imagined."
Martha Shanahan, director of community benefits at St. Joseph, said ADCS has been operating on a "shoestring" budget as McManus tried to 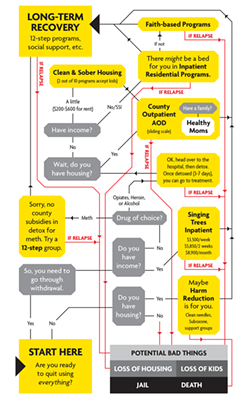 bring together the necessary pieces to best serve his patients: staff, location and money.

Meanwhile the MAC, which was operating as a homeless intake and transitional housing facility, was experiencing its own a chicken-egg problem around homelessness. According to the summary prepared by Melinda Peterson, the city's housing project manager, the persistent problem of substance use disorders "severely negatively affected the long-term success of program participants."

Peterson stated that "close to 90 percent of participants were diagnosed with either mental illness, Substance Use Disorder, or both. Many program participants have been unable to successfully complete the process to housing because of their substance use disorder(s)."

So marrying the addiction program in need of a modern facility and the facility in need of comprehensive treatment seems like a win-win for both entities, and most importantly, a community which has an extremely high rate of addiction, addiction-related diseases and deaths due to opiate overdose. Previous Journal coverage has examined our region's lack of comprehensive treatment for addicts and alcoholics.

But in order for the program to continue, a continuous funding stream needs to be in place, and until recently, the fate of Drug MediCal was in question. Shanahan says that it was touch-and-go for a while as Congress wrestled over a partial or complete repeal of the ACA, which would have put MediCal funding in question, meaning the program might have petered out once granting funding was used up. But they pushed forward with the hope the funding would stay in place and, after several years of struggle, the right formula of time, place and money seems to have coalesced to bring McManus's vision to fruition. St. Joseph is also establishing a program called Humboldt Accountable Community for Health, a branch of a national program devoted to improving health outcomes, particularly in regards to mental health and addiction.

"This is really going to kind of raise the bar to expand capacity and provide a higher quality, better level of care for folks needing those detox services, also treatment services," says Shanahan.

The 30-day residential treatment program, which will implement case management from RCAA to help connect patients with resources, such as housing after treatment, is expected to open this September. Residents will have the option to stay up to a maximum of six months, depending on their case. According to the city's summary, all previous residents of the MAC have been housed and "it is an expectation of the city that the facility will result in a measurable reduction of homelessness in Eureka."

From the City of Eureka's Agenda Summary:

The Multiple Assistance Center (MAC) has been operating since 2005
as an adult and family homeless housing facility operated by Redwood Community Action
Agency (RCAA) and funded by Humboldt County Department of Health and Human
Services (DHHS). For the last two years, the facility was operated as a Homeless Intake
and Transitional Housing Facility and has successfully housed many participants. During
that process, the operator noted that a significant portion of the program residents
experienced the persistent problem of Substance Use Disorders, which severely
negatively affected the long-term success of program participants. Close to 90% of
participants were diagnosed with either mental illness, Substance Use Disorder, or both.
Many program participants have been unable to successfully complete the process to
housing because of their substance use disorder(s). Accordingly, a new program is being
envisioned for the facility. It is important to note that all occupants of the previous program
have been placed in permanent or transitional housing and that the facility currently has
no program participants on site.

City staff, Alcohol Drug Care Services (ADCS), RCAA, DHHS, and Providence St. Joseph
Health have been collaborating for several months to envision an expanded set of
programs in the facility. While the facility will offer many of the same services as before,
the expanded programs will now include medically-monitored detoxification and on-site
residential treatment services. This evolution of the facility provides a much-needed
community service by assisting individuals with substance use disorders, which is
expected to improve the long-term success rate of the facility’s other programs.
ADCS and RCAA will partner in the operations of the facility and programs. ADCS will
operate the Substance Use Disorder Treatment Program, medically-monitored detox
program, and a possible future sobering station component (to be potentially phased in
at a later date). RCAA will provide facility operations, including maintenance, kitchen
operations, supportive services, after-care follow up, care coordination for housing
placement, and employment assistance. One of RCAA’s most important roles will be to
work with residents during their time at the facility in order to facilitate the residents’ longterm
success following the completion of treatment.

The facility will treat both men and women, and the majority of individuals treated will be
low income individuals (80% of Humboldt County Area Median Income or less), with 25%
or less of those treated being private pay (which will assist in offsetting the costs of the
extremely low income patients). The facility will be licensed for 56 beds for in-house
medically-monitored detoxification and on-site residential treatment services. Resident
stays will vary from 72 hours up to a maximum of six months. It is expected that many of
the residents will be homeless and it is an expectation of the City that the facility will result
in a measurable reduction of homelessness in Eureka.

Currently, RCAA has an existing Lease agreement with the City of Eureka for operating
the MAC and this agreement will be canceled and superseded by the new Co-Lease
Agreement upon execution by the City Manager. The State of California Housing and
Community Development HOME Department retains a covenant on the property until
September 31, 2025, and has provided approval of this additional use.
As an important side note: According to representatives from Providence St. Joseph
Health, on July 3, 2017 the project was awarded a “Well Being Trust” grant for the bridge
funding to convert the MAC to the envisioned medically-monitored detoxification and onsite
residential treatment services program. The Providence St. Joseph Health review
committee had high praise for the project and liked the multi-sector collaboration. An
official communication is in the works from the Trust and the Providence St. Joseph
Health and should be released in the next week or two.