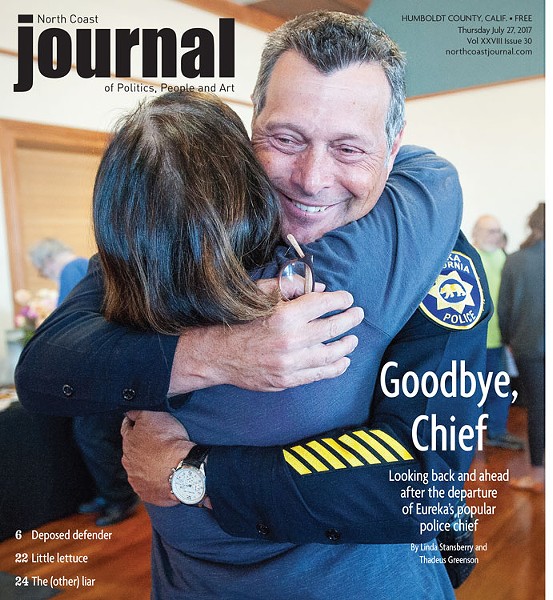 In case you missed it, Humboldt County bid former Eureka Police Chief Andrew Mills adieu last week. We offered a handful of stories looking at his tenure in town and what’s next for EPD. We encourage you to take a few minutes to look at the coverage and weigh in. But there are also a few things we weren’t able to squeeze into last week’s edition, like the five times Humboldt County almost killed Andrew Mills. Here's the rundown:

When he got lost in community forest: “One of the things I’ve learned: Chiefs of police can get lost in the woods, too, and your little iPhone compass doesn’t work when you can’t get cell reception,” Mills told a Times-Standard reporter, less than a week into his new job in 2013, confessing that a job in Arcata’s Community Forest turned a bit tense before he found his way out.

When he got swept off the jetty: On Nov. 5, 2016, Mills decided to walk out onto the jetty to take pictures of large waves sweeping in. The National Weather Advisory had warned of 19- to 22-foot waves over the weekend and asked people to “stay safe … by staying farther back from the surf and off the rocks and jetties.” It’s a frequent warning on the North Coast, and one that Mills apparently missed. In the blink of an eye, a wave smashed him and left him holding onto the jetty rocks for dear life. Luckily, after being pummeled by a few waves, Mills was able to get back to his feet and back to his car, having lost only some skin off his knees, his cell phone and a bit of confidence. “The real thing is, compared to the power of nature, we are insignificant,” he told the Journal a few days later.

When he jumped into a sewage pit at the PalCo Marsh: While talking with some homeless men camping in the PalCo Marsh, Mills jumped off a concrete slab onto what he thought was solid ground only to find it was, in fact, a deep pit of stagnant water and human waste. The horrified men rushed to help the chief, who was “up to his armpits” in sewage, out of the pit. Mills described himself as mad but he somehow managed to avoid death by E Coli infection.

When he unwittingly waded into a Second Amendment gauntlet: Frustrated by the high rates at which firearms were being stolen in Eureka — and the higher rates at which his officers were finding them in the hands of felons and criminals — the police chief proposed a local gun control ordinance. Tepid by lefty standards, the ordinance would have only required gun owners to make sure their firearms were secured and locked up when left unattended in their homes or businesses. But within moments of its announcement, Mills was dogpiled by a virtual mountain of Second Amendment enthusiasts, like Robert Wenzel, who posted the following on the Journal’s website: “Maybe Mills should move to San Franfreakshow. This is just another waste of taxpayer dollars that accomplishes nothing except add further restrictions to personal liberty. Good to know that Mills is another Kalifornia libtard politician.” Frustrated and battered, Mills withdrew the proposal less than a week after its announcement, saying his department would focus instead on “education.”

When officers unloaded 43 shots downtown: We may be projecting a bit here, but we imagine Mills had a minor heart attack upon hearing that his officers had unloaded 43 bullets onto the streets of downtown Eureka shortly before 5 p.m. on a Tuesday. Again, possibly projecting, but we imagine that feeling only intensified when he learned that the suspect — Clayton Lee Lasinski — didn’t fire a shot at the officers and was only hit once in the barrage. At a press conference the day after the chaotic shooting, Mills said he understands “each officer is personally accountable for every round that they discharge and where that round ends up.”