Eclipse 2017: Humboldt Sits on a Partial Path of Totality

While we won’t get the full view, Humboldt County residents will still have some pretty good seats for one of the greatest celestial shows on earth when a total solar eclipse takes place Aug. 21.

At the height of the event visible here on the North Coast — where the maximum coverage will hit around 87 percent — the sun will appear as a glowing crescent sliver, much like a waxing moon, according to Ken Yanosko of the Astronomers of Humboldt club.

“It’s going to be a pretty good show, yes,” he says, noting that Mother Nature could still throw a wrench into the view, especially along our notoriously overcast coast. “Even for people who go to the path of totality it’s a gamble because you can always get clouds.” 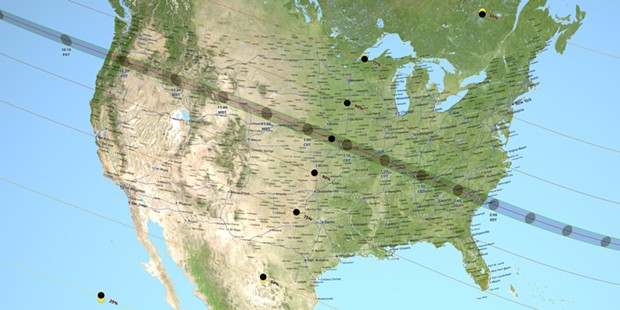 Locally, the moon will begin taking its place in front of the sun at 9:01 a.m., according to the website Time and Date, reaching a near total eclipse at 10:14 a.m. and wrapping up the two hour and 34 minute display at 11:35 a.m.

Obligatory safety warning: As tempting as it may be, do not look at the sun without the proper gear. See safety tips to avoid eye injury and a list of approved eclipse glasses here, and instructions on how to make pin-point viewers here.

This will be the first time since 1918 that a total solar eclipse has shimmed its way coast to coast — in this case, hitting full tilt in 14 states along the route from Oregon to South Carolina — meaning millions will get a taste of the action.

“The path is very long,” Yanosko says. “It’s all the way across the United States, so there’s an opportunity for a lot of people to see the eclipse; that what’s important about it.”

When Yanosko says “a lot of people,” he’s not exaggerating. NASA’s eclipse website estimates some 500 million will get at least some sort of glimpse — although only a fraction will be able to see the coveted total eclipse of the sun.

Yanosko, like many others, will be making the trek up to Oregon to be in what’s known as the “path of totality,” where day will briefly turn to night.

But, he cautions against trying to make an impromptu trip since most accommodations in prime viewing sites were booked well in advance and the roads in many areas aren’t equipped to handle the projected onslaught of visitors.

San Jose Mercury writer Patrick May did find some possibilities, according to an Aug. 1 article he wrote, but those come with some steep prices and might literally mean pitching a tent on what normally operates as a hay farm, as locals in observation hot spots look to take advantage of the celestial windfall.

That being said, Yanosko reiterates that safety needs to be the No. 1 priority.

“Use safe glasses or some sort of projection system,” he says.

For more information on the eclipse and how to safely watch the event once considered an omen of impending doom, visit NASA’s website, the American Astronomical Society's website or the Astronomers of Humboldt website. 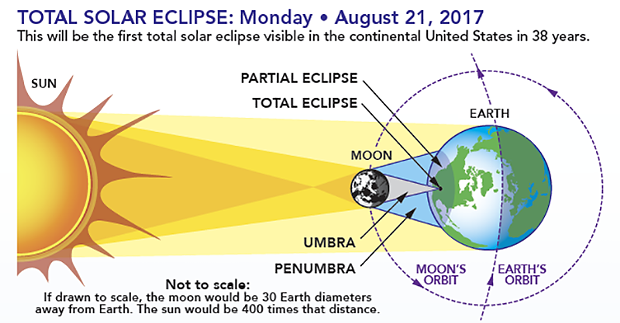 NASA also has an interactive map of the arc across the county.