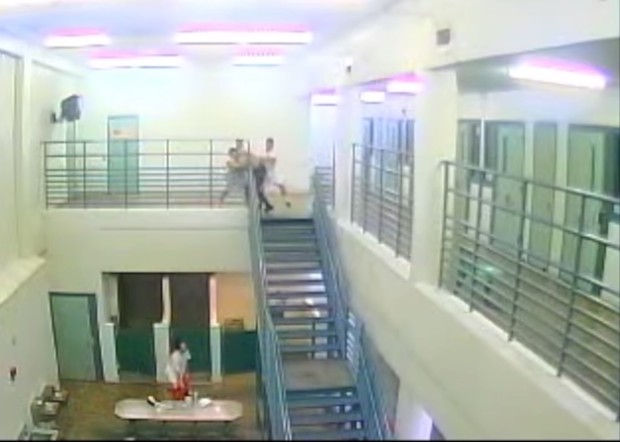 Humboldt County Sheriff William Honsal held a press conference this morning to share details about a Wednesday evening assault on a correctional deputy at the county jail and to call for more state resources in response to a surge in similar attacks since the 2013 passage of Assembly Bill 109.

According to Honsal, the attack on deputy Dillon Huffman is the 22nd such attack on a correctional officer in 2017. Huffman was apparently lured into a maximum security cell during a routine cell check at around 7:20 p.m. on Aug. 9 after two inmates, Lorence Emmanuel Bailey and Jonah Dale Little, allegedly invited him to look at some artwork. The men had shed their uniform orange jumpsuits and were "prepared to fight," said Honsal. In a video released by the HCSO, Huffman can be seen entering the cell and then backing out again as the two men hit him with their fists.


Honsal says Huffman both "exercised restraint" and displayed skill in how he managed the attack, creating distance between himself and the inmates, deflecting blows and also somehow managing to radio in an alert to the rest of the on-duty officers, who arrived within 35 seconds to contain the situation. Honsal said the attack resembled that of a gang "jumping in," and that one or both of the men might have been trying to solidify their reputations prior to going to prison. Huffman had no prior beef with the inmates. Honsal declined to say what their gang affiliations might be.

Bailey was being held on a number of charges, including murder, while Little was being held on a probation violation. Both will face additional charges related to the assault, including a gang enhancement. Huffman is "in good spirits" despite receiving several blows to the face and will soon return to work, Honsal said.

In his press conference, Honsal said "we have to push back on the state" for realignment measures — like A.B. 109 and Proposition 47 — that have created overcrowding in local jails, saying the jail is often at capacity and that staffing cannot keep pace with the influx of inmates, many of whom have mental health issues. The intention of A.B. 109 was to relieve overcrowding in prisons by sending non-violent offenders to serve their sentences in county jails. A 2013 study from the University of Southern California indicates that "the safety and healthcare concerns that were previously evident in state prisons are now being seen in county jails."

"My message to the state is that you need to start taking responsibility for your mess," said Honsal. "When your jail is your biggest mental health provider in the county, that's a problem."

Honsal quoted internal reports showing that in 2013 there were three assaults on correctional officers, two in 2014 and 36 in 2015. He said retention of correctional staff and increasing training time for staff will be prioritized.

Drew Redden, business agent for the local chapter of the American Federation of State, County and Municipal Employees, confirmed Honsal's observations about A.B. 109.

"Since A.B. 109 has gone into effect, the amounts and frequency of assaults has increased substantially," Redden said. "You’re having a slightly different sort of person that’s in the jail that might not have been there before A.B. 109. I think you’re seeing quite a bit of concern about that."

Union members have reported to Redden that retention has become a self-perpetuating cycle within the facility, as many officers are working overtime at lower wages than other places in the state. The jail has become a "training ground" for officers that want to prep their resume to move on to better-paid positions elsewhere, leading to an exodus of institutional knowledge.

"The starting wage for a correctional deputy is mid-$16 an hour," said Redden. "If you can make that same wage at CostCo or Target, make the same wage (without) someone trying to stab or throw feces in your face, how likely are you to stick around, even if you have retirement benefits? It’s a hard sell."

Redden added that correctional officers have been working with mandatory overtime for over two years, which has an enormous toll on their health and family lives. Sheriff Honsal, he said, has been responsive to concerns, but he hopes the Board of Supervisors also takes notice.