Twenty days before he went on KINS Radio’s “Talkshop” program and touched off a public firestorm by musing aloud about the city of Eureka’s “giving away” Indian Island to the Wiyot Tribe, Robin P. Arkley II had some questions. A letter dated July 11, sent from Arkley’s company Security National to Eureka City Manager Greg Sparks and obtained by the Journal through a California Public Records Act Request, is titled “RE: Legal Authority.”

“It has come to my attention that the city of Eureka is transferring property, owned by the City, to the Wyott Tribe (sic),” Arkley begins. “The purpose of this letter is to request what legal authority the City has to give City owned property away, and what compensation the City may be receiving in return.”

No details about compensation have been made public, as the city and the Wiyot tribe have signed a confidentiality agreement over negotiations for the transfer of the property in question: An island in Humboldt Bay, known before colonization as Duluwat or Tuluwat Island, which in recent years has been dubbed “Indian Island.” Arkley also refers to the property as “Gunther Island,” a name it bore for several decades. Robert Gunther, a dairy farmer, purchased the island on Feb. 23, 1860, three days before settlers slaughtered between 40 and 100 Wiyot women and children there. The city has been in negotiations with the Wiyot Tribe to return the island, the site of the tribe’s World Renewal Ceremony, for more than two years, and transferred a 40-acre portion of the island's northeastern tip back to the tribe in 2004.

As Sparks explains in his reply, dated July 14, the city hadn’t transferred the property yet and, as of the time of this publication, still has not. The agenda item that raised Arkley’s ire was a July 18 Memorandum of Understanding, ultimately approved by the city council, which reaffirmed the city’s commitment to making the transfer in the future. Sparks tells Arkley a draft agreement will be made available to him and other members of the public when it is completed.

A few minutes later, he seems to have another thought, sending another email to Sparks, and cc’ing the city council, his wife Cherie Arkley and former Eureka Mayor Nancy Flemming.
“Actually, I would like a copy of your council’s authorization,” he writes. "I will not sit by and watch our city’s scares (sic) resources be transferred without adequate processes being followed. Right now, I have my doubts.”

A day prior to the city council meeting, on July 17, Arkley again emailed Sparks, asking to meet with him and the city attorney that day or the next.

“It is waaaaaay premature to do the MOU,” he writes. “The rights [of] the people of the City have to be considered.”

Among the considerations Arkley raises are the potential benefits of the island the city is “giving away,” including “the right to simply walk on the property at our whim.” He urges Sparks to think of “future generations of Eureka citizens.”

“I am not picking a fight with anybody,” he writes. “There are considerations that are bigger than the history of Gunther Island.”

Sparks replies that he is largely booked up that day and unsure of the city attorney’s schedule, but has time open the day of the council meeting. He reiterates that the MOU only reconfirms the process begun two years earlier and that the council received community input in support of the transfer when the process began. He suggests Arkley attend the meeting if he has concerns he’d like to address with the city council.

“Greg, you ought to have, as part of your file, legal authority to do this,” Arkley replies. “Please provide that to me.”

Arkley’s justification, explained in the July 17 email, is as follows: If the city sets precedent for “giving away” public property, future “public assets could be declared surplus and given away at the whim of a renegade city council to any favored transferee de jour of the day.”

"This is a thinly veiled gift to a favored group/nation at taxpayer expense." tweet this
“The room for abuse is endless,” he writes. Arkley also smacks Sparks for taking instruction from the council without evaluating whether or not said action is legal.

“It ought to be evaluated from a legal, not emotional standpoint,” he writes. “…This is a thinly veiled gift to a favored group/nation at taxpayer expense.”

Hinting at a future course of action, Arkley says he believes that surplus property should be put to a bidding process, again raising the status of Native American tribes as sovereign nations.

“This property ought to be in a public charity’s hands, who can administer it for public benefit, not for the benefit of a separate nation,” he writes. “I will do everything in my power to see that it is ‘surplused’ into an entity that allows the public [to] continue to enjoy its use. I will see you at 8:30 tomorrow.”

Details from that meeting are unavailable but, as we know from the July 18 city council meeting, the council unanimously voted to sign the MOU verifying “the city is still committed to making the transfer.” The MOU makes reference to ongoing legal issues that the city must negotiate before completing the transfer. Several members of the Wiyot Tribe attended, with Chair Ted Hernandez saying the tribe’s intention was to restore the island’s natural resources and resume ceremonial use of the land. Public comment was brief and universally in favor of approving the MOU.

It was shortly thereafter that Arkley went public with his frustration, telling KINS radio host Brian Papstein that his children enjoyed visiting Indian Island and the council was just “giving it away.” In the subsequent firestorm, he and his wife Cherie released a public statement to the Lost Coast Outpost, saying that while they would like to purchase the island, they do not want to own it.

“Why can’t we come up with a solution to share the island?” the statement posits.

On Aug. 3, Tim Callison, a representative of Arkley’s company, Security National, sent a formal letter to the city council, offering $500,000 for the western half of the island and offering to donate the property to a conservancy group to ensure the land “remains available for public access, including the Wiyot Tribe.”

The letter adds in bold that it appears "there potentially may be several legal obstacles" to the city's plan to transfer the property back to the Wiyot Tribe.

Subsequent emails question the formal appraisal ordered by the city, accusing the independent appraiser of having been "coached" and the whole process of being “under the table and results oriented.” Sparks denies that accusation in his emailed response. Arkley, having read the appraisal, writes, “You have to be kidding me.” The Island is far undervalued, he writes, calling the appraisal “sloppy” and alleging its based on information that is already 12 years old. His words hint at future litigation.

Sparks, in his reply, says due diligence has been exercised and the public will have plenty of time to weigh in on the process once a draft agreement has been reached, at which point the appraisal may be updated according to direction.

“As for meeting with myself and the city attorney, I do not believe we are at a point where that will be useful,” Sparks says. 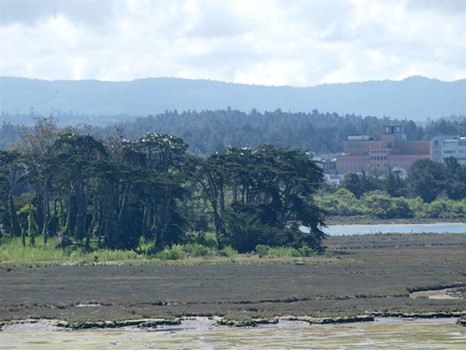 Sparks did not respond to the Journal’s request for comment, but the content and tenor of the email exchange seem to summarize what is at stake. The city, as represented by the city council, has reaffirmed its decision to return the island. The details of how exactly that process will shake out, and the formal agreement that might come out of it, may not see sunshine for several years. In the meantime, Arkley is having none of it and appears to be trying every means to stymie the nascent attempt at reparations. (He is also busy on the other side of the country, according to an article in the Tulsa World, sending money to the Judicial Crisis Network, an organization that funnels so-called "dark money" into efforts to get conservative judges on state and federal benches, and is currently lobbying to change long standing Senate rules as President Donald Trump has repeatedly urged.)

In the most recent email obtained by the Journal, dated Aug. 17 and time-stamped 3:30 a.m., Arkley attempts a stunning reveal.

“The comp[arison] from which YOUR appraiser derived his value was the 250 submerged acres bought about a dozen years ago by an undisclosed buyer,” he writes. “I am happy to inform that the undisclosed buyer was ME.”

He adds that the comparison is not analogous to the rest of the island and the appraiser’s value is “simply not defensible.”

“If this devolves into a fight, which I sincerely hope it does not, the City is grossly exposed,” he writes. “I prefer to follow a consensual and positive path that benefits and protects all the citizens of Eureka.”

Failing that, the city could try another path, suggested in an earlier email by Arkley: Put the sale to the Wiyot Tribe on the ballot in 2018.

“That way the council will have a great issue to run on," Arkley writes. "Something tells me that they/you are woefully out of touch with the citizens of Eureka.”

Phone calls to Arkley seeking comment for this story were not immediately returned but we'll update it when and if he responds.