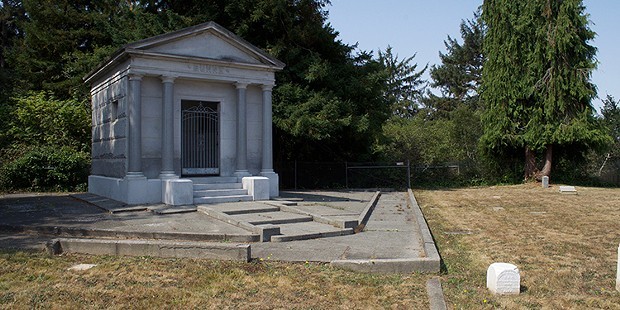 While we encourage you to take a look, here’s the long story short: A group of dedicated volunteers has been working for nearly two years to bring the cemetery built in 1861 back from the brink of obscurity. Together, they’re manicuring the grounds, uncovering long-hidden headstones and repairing dozens of markers that time broke apart.


There were, however, quite a few things we weren’t able to fit in, so we’ve included an additional trio of items here: a mystery, a rumor and just an interesting tidbit about the cemetery where Eureka’s residents were laid to rest for more than 150 years.

The case of the missing mausoleum: While there are currently five mausoleums at one end of the 10-acre grounds, there was once a sixth monument for the Kimball family on the opposite side near Myrtle Avenue. “We have no idea what happened to it or when it was gone, but it was made of pink marble,” says Kirby Nunn, who spearheaded the cemetery project.

Headstones in the bay: A long-held, if not widespread rumor about the cemetery is that a number of headstones were dumped into the bay after an overhaul of the site took place in 1950s. All of the stones were moved and line up against a fence so the grass could be burned and the ground leveled. The markers were then put back in place.

Cemetery volunteer Milton Phegley, a virtual walking encyclopedia of Eureka history, says there are certainly headstones that have been recovered from Humboldt Bay, but those were more likely castoffs from the stonework businesses that were once located there.
Sometimes, he says, people didn’t pay for the work or there was a mistake made, so the markers were eventually disposed of, which is what he believes is the case here. “We’d really like to know what the truth is,” Phegley says.

Keeper of the key: A year or so ago, the cemetery volunteers were going to clean out the marbled interiors of the five remaining mausoleums when they ran into a small problem: No one had the key to the Carson family crypt. A suggestion was made to reach out to Marsha Daly, one of the Carson family decedents, who still lived in town. As it turns out, she did indeed know where to find the original iron skeleton key, which was with an out-of-town relative. Once back in town, the key was put to the test. “It took several hours, WD-40 and elbow grease, but the key worked,” volunteer Milton Phegley says.