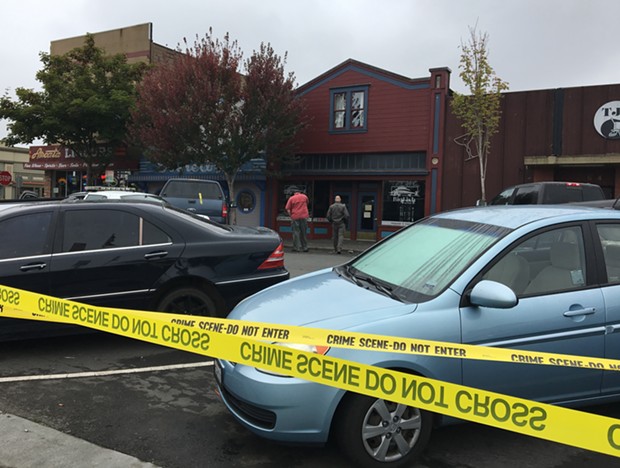 A shootout in front of bar row on the Arcata Plaza around 2 a.m. left a Humboldt State University police officer wounded and a suspect dead.

The officer’s injuries are considered serious but not life threatening.

According to an Arcata Police Department press release, an APD officer was with the UPD officer investigating a report of a man waving a handgun on the plaza at about 1:40 a.m. When the officers approached a parked vehicle, a 26-year-old reportedly got out and opened fire, wounding the UPD officer. Both officers returned fire, fatally wounding the man, who was later pronounced dead at Mad River Community Hospital.

The suspect, whose identity is currently being withheld, reportedly has prior felony convictions. APD plans to provide an update at 6 p.m. today with further information.

FOR IMMEDIATE RELEASE
POLICE OFFICER SHOT BY ARMED CONVICTED FELON
On September 9, 2017 at about 1:40am, an Arcata Police Officer and a Humboldt State University Police Officer were investigating a report of a man seen waiving a handgun on the Plaza. Reportedly the man was involved in an altercation when he displayed the gun.
Preliminary reports indicate that as the police officers approached a parked vehicle, the suspect, a twenty-six year-old male, with past felony convictions, got out of the vehicle and fired a handgun at the officers. The Humboldt State University Police Officer was wounded by the gun fire. Both officers returned fire, hitting the man. The man was not an HSU student. He was pronounced dead at the Mad River Community Hospital. His identity is being withheld pending notification of family. The police officer who was shot was transported to a local Hospital where he has been admitted. His injuries are not life-threatening. A handgun was recovered at the crime scene.
The Humboldt County Critical Incident Response Team (CIRT) which includes investigators from the Eureka Police Department, Humboldt County Sheriff's Office, Humboldt County District Attorney's Office, Fortuna Police Department, California Highway Patrol and the Department of Justice Crime Laboratory are investigating this shooting.
Witnesses are asked to call the Arcata Police Department, (707) 822-2426.
No further information will be released at this time. The Arcata Police Department will issue an update this evening at 6pm.

Below is a statement from Humboldt State University:

The following statements relate to the shooting that occurred early this morning near the Arcata Plaza. Details on the incident are available from the Arcata Police Department.

HSU President Lisa Rossbacher: “Our officer was shot this morning while serving and protecting our community. He was treated, and I’m relieved to hear that he is in stable condition. I want him, and his family, to know that we appreciate his service and that they are in our thoughts.”

Insurrection in the Capitol