Redwood Pride Starts Over in Arcata 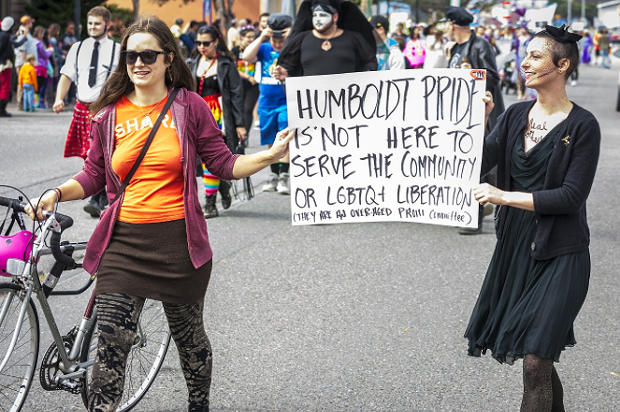 On Friday, with 48 hours left to prepare for Humboldt County’s Pride festival on the Arcata Plaza, organizer Kate Trower had a head of newly dyed pink hair and a little time to talk on the phone. Last year's tumult and the dissolution of the Pride board of directors left the event with an uncertain future and much of Humboldt's LGBTQ community divided. "It's an interesting time to be planning and organizing,” she said. She wasn't kidding.

Dissatisfaction with the then board members of the nonprofit Humboldt Pride organization and its response to requests to become more inclusive of marginalized communities such as people of color, sober people, youth and disabled people, came to a head with a letter of protest from an anonymous group calling itself 32 Queers. Similar critiques and grievances were aired at a moderated forum at Humboldt State University. Tension ratcheted up on the cusp of last year's parade and festival with the vandalizing of Pride event posters and BB gun shots fired into the homes of two people associated with the local LGBTQ community — though Eureka Police established no connection between those shots and the rift, it rattled many. Then in October, shortly before a scheduled public meeting, the board of the Humboldt Pride voted to dissolve the decades old organization, prompting public outcry.

Trower is not in charge, she clarified, just one of a number of people working on this year’s event, which is temporarily operating under the LGBTQ Community Space Project’s nonprofit number to handle donations and other logistics. “It's kind of in absence of a group," said Trower. It’s unclear how long this structure will continue or what shape a separate organization might take. “More radical elements of the community want less structure," she said, adding that the word “collective” comes up a fair bit. But, she conceded, there are benefits to having a board and bylaws, too.

Even as it makes big changes, the event is in some ways returning to its origins as it returns to the plaza. Trower said it’s "going back to the roots of pride being political," not only in terms of the LGBTQ community coming together in solidarity but addressing its divides.
“Part of the schism we have in the community is the desire to cling to the solidarity part," she said, which sometimes means falling back on white privilege and ignoring struggles within the community, particularly those of marginalized queer people. Trower, who saw many of the same issues arise in national protests such as the Women’s March and Black Lives Matter, suggests the metaphor of the extra work it takes to build a ramp into a house instead of stairs and the rewards of getting everybody into the house. 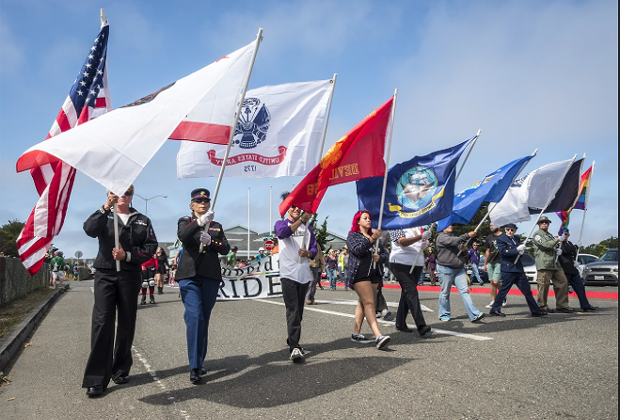 As of Friday, not everything was nailed down for today’s event. "We’re still adding a few things," she said, adding that the group was hoping to get a kids’ zone together with help of the Girl Scouts. Of course there is a parade — from the Creamery Building to the plaza — but unlike previous Eureka festivals, the event is alcohol free and she described it as “more introspective” with a focus on “queer people of color and other marginalized communities, disabled and rural folks.” Echoing the events and discussions scheduled all week, there are a few LGBTQ vendors and about 17 informational booths for organizations and service providers catering to the LGBTQ community. And rather than a schedule focused on entertainment, there’s an open mic for everything from sharing opinions to performances and a handful of speakers.

Some of the changes have been met with resistance on social media. The Redwood Pride Facebook page is dense with comments debating everything from whether the color guard featuring uniformed LGBTQ veterans that has led the parade in past years is a symbol of military violence and oppression, and whether or not Samba da Alegria performances amount to cultural appropriation. (As of Friday, Trower said the color guard was scheduled to march but there was to be no formal samba performance.) Some members of the community who’ve been regulars at Pride in the past have also stated that they won’t be attending, as the event, after so much public controversy and so many personal disputes, no longer feels like a haven.

While Trower said she prefers not to comment on individuals, she gets it. There’s “a lot of baggage,” and “one of the things that’s perfectly valid right now is just knowing that you’re not emotionally ready to engage with the community."

As Redwood Pride wrestles with inclusion and exclusion, Trower said a basic question is “how to frame the idea of ‘safe space’ — safe for who and unsafe for who?" That, she said, includes minor issues “all the way up to very severe, very real trauma and triggering behavior."

She acknowledged that those are difficult, uncomfortable conversations with people who may be angry, rightfully or not, with a common goal or not. Some of those conversations are happening in the online comments she monitors seemingly round the clock. “It takes patience,” she said, taking a breath. “It requires empathy and compassion and not taking things personally."