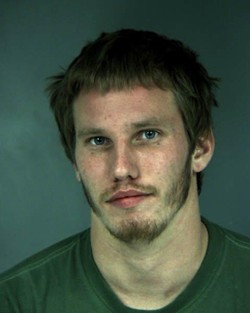 The Humboldt County Sheriff's Office is searching for a 27-year-old man in connection with a fatal shooting in Alderpoint on Saturday.

Officials said Zachary Cordell Harrison was last seen leaving the scene of the Sixth Street homicide just before 3 p.m. in a black Ford F250 with Oregon plates. He is considered armed and dangerous, according to the sheriff's office press release.

A witness and the victim, 58-year-old Robert James Holtsclaw, were stopped at a gate when Harrison reportedly fired one shot while standing next to the vehicle, according to the release. The witness ran to a nearby house to call for help. Holtsclaw died at the scene.

The shooting remains under investigation. Officials are urging anyone who spots Harrison to call 911.


On 09-23-17 at about 2:44 pm the Sheriff’s Office received a call of a possible homicide in Alderpoint. Once on scene deputies learned that 58 year old Robert James Holtsclaw had been shot and was declared deceased. A witness told deputies that he and Holtsclaw had been stopped at a gate on 6th Street in Alderpoint. The witness saw suspect Zachary Cordell Harrison (27 years old) standing near the vehicle with a firearm. The witness then heard one gunshot which he believed struck the victim. The witness fled from the vehicle and went to nearby neighbor’s house to call for medical assistance. Harrison was believed to have last been seen driving in the Alderpoint area in a black Ford F250 with Oregon license plates. This homicide is currently under investigation and anyone with information is urged to contact the Sheriff’s Office at 445-7251. If Harrison is seen please call 911 immediately. He is to be considered armed and dangerous.