Humboldt Deputy on Vegas Shooting: 'Everyone Was Helping' 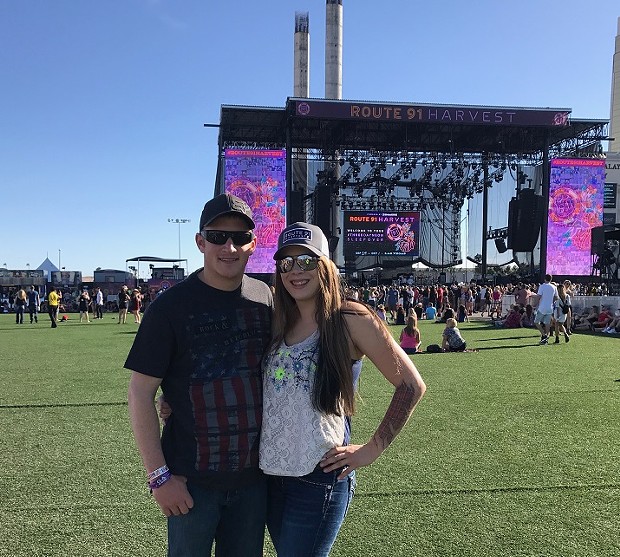 A local couple, Humboldt County Sheriff’s Deputy Dustin Del Biaggio and Ferndale Police Officer Tierra Shumard, were standing in front of the stage on the last day of the Route 91 Harvest Festival in Las Vegas when the shooting started.

They saw people around them fall to the ground, but were able escaped unharmed and have returned home. While both are declining media interviews at this time, Del Biaggio released a first-hand account of what they experienced in those 72 minutes of terror that took 59 lives and injured more than 500.


"It was during the last performer of the night. We got to the show early, so we had made our way to the front of the stage.

At one point, we heard what sounded like firecrackers, that's what the audience thought it was.

Shortly after that, they started again, and we started to see people drop in front of us. Time doesn't really add up, but we dropped to the ground and I covered up Tierra.

We waited until the gunfire stopped and started to run towards the back. As we were running, there was another bust of gunfire as we were about halfway to the exit.
People were calling to "cover up the women," and a few people jumped on us to shield us from the gunfire.

When it stopped again, we made our way to the back of the venue where some people had already pushed out the back wall of a bar.

Around this time we ran into a LVPD officer who told us "Mandalay Bay, 15th floor."

In retrospect, this information [on the presumed location of the shooter] was key in keeping us safe, since we avoided the line of fire from that point on.

We came out of the building in a strange parking lot full of semi-trucks.
This was when I had a chance to pull up a map on my phone of the surrounding area to get my bearings.

This is when we finally had a chance to call our parents, to let them know we were OK and find out what was happening.

The community was amazing. Uber and Lyft drivers were just picking people up. We saw a girl in shock whose father had been shot and went with her to the hospital in an Uber that stopped for us.

There was no selfishness, everyone was helping.

I can honestly say that tunnel vision kicked in, the stress response was incredible. I can’t remember the emotion on people's faces, screams, any of that. I can only remember gunfire, and the silence when it wasn't there.

I really think that my LEO training was instrumental in the whole thing. When it happened, I really felt that the training came back, the feeling of take cover, all the things they teach you made a difference. It was a tough feeling being in the civilian role, not able to help, but lookingback our training helped to keep us safe.

We are doing OK, but I definitely have pangs of shock, disbelief, confusion and especiallysadness for the victims, people that can't come home."