After a lengthy presentation by Eureka Development Services Director Rob Holmlund, a series of clarifying questions by the councilmembers and a largely positive round of public comment, the Eureka City Council approved a broad set of staff recommendations that essentially welcome recreational marijuana businesses within city limits.

The decision came in advance of the implementation of state laws around adult recreational use of marijuana, due to take effect in January. Other cities, including Fortuna, have proactively restricted commercial cannabis sales and distribution to a degree more stringent than state law permits. Eureka's approach toward the industry appears to be on the laxer end of the spectrum, with commercial cannabis testing labs, manufacturing facilities, dispensaries and indoor grows all on the table.

Holmlund said the city has received 41 commercial cannabis business applications to date, with six medical cannabis businesses currently in operation. The city's decision will fold recreational cannabis sales into existing medical dispensaries, meaning consumers will no longer have to have a 215 card to purchase cannabis within city limits. The city rejected staff's suggestion that dispensaries should be capped at six, a number based on an algorithm that's based on the "amount a population can handle," according to Holmlund. Instead, the council will only approve two retail permits every six months, which will allow them to check the growth of commercial cannabis dispensaries, according to Councilmember Kim Bergel.

Councilmember Austin Allison asked several times if the permitting process could be sped up — it currently takes about nine months, longer if the businesses are in the California Coastal Zone. Holmlund replied that the only way to do this would be to eliminate the Request for Proposals process, which would bypass required police and fire inspections.

"There are mechanisms we could use to make the timeline faster but there are consequences to all those possibilities," Holmlund explained. Allison ultimately demurred on this issue.

"I know there is a lot riding on individuals who want to bring the local cannabis industry out of the darkness and into the light," Allison told the Journal later. "I was asking for clarification ... as to why some of this regulation could take up to nine months from start to finish. Staff explained well enough and it is clear to me that all of this stuff takes time to do things right. I want things to be done right and sensibly."

Public comment brought people involved in the cannabis industry to the podium, including Jeff Poel, owner of the city's first dispensary, Eco-Cann, who asked the city to revisit its policy on signage and allow him to more prominently advertise his shop on F Street. Andrew Giacomini, who owns several warehouses on Fourth Street, spoke of the positive impact the industry would have on the city, saying he and his family were about to take their investments to the Bay Area but now he is refurbishing his warehouses and preparing to rent to someone in the industry. The lone voice of dissent came from Karen Brooks, former county supervisor and state Assembly candidate, who expressed concern about the impact of the industry on local children.

"A big part of getting jobs out of the hills is protecting women and other people," she said.

Other amendments to the city's code that will have impacts on the industry include a change in language that eliminates the size of processing areas, meaning that, for example, if someone has a personal grow, they won't have to maintain a specific 20-square foot area in their home to process their cannabis. The council voted unanimously to approve the amendments, with Allison absent because he had to leave the meeting early.

Other items approved by the council included the Brainard Annexation, which means the California Redwood Co. land along the safety corridor will be formally included in Eureka City limits.

The council also reviewed the work of an ad-hoc committee, which gave its recommendations for drawing ward boundaries in advance of next year's elections. Last year, voters passed Measure P, which changed the city's electoral system to a "True Ward" structure in which councilmembers can only be elected by residents of their ward, not by the city at large. To date, Eurekans have been able to cast ballots for every council member, regardless of ward. A copy of the proposed true ward map, which may be approved via ordinance at the next meeting, can be found below. 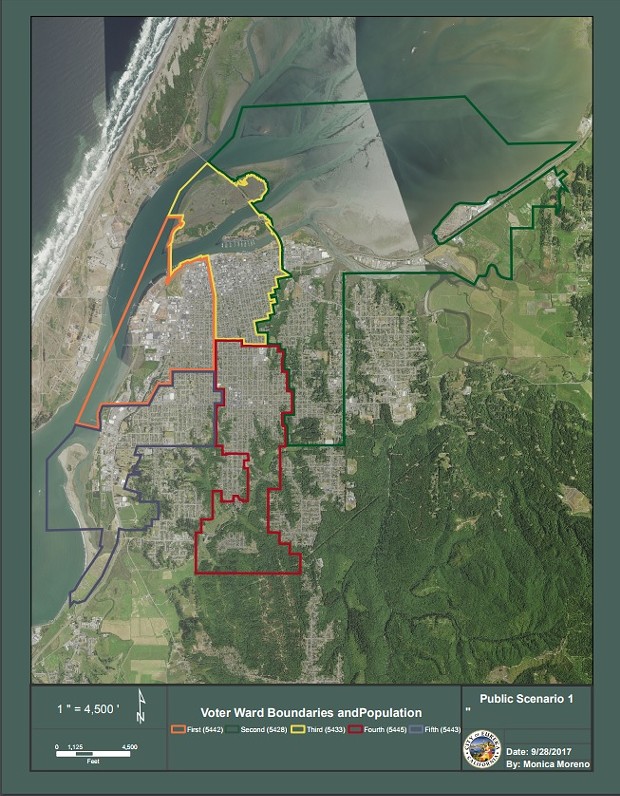