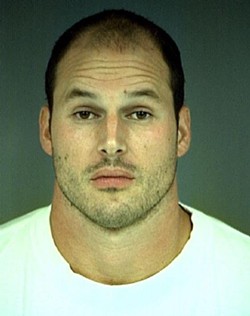 Mikal Xylon Wilde, the Humboldt County man serving a life sentence for murdering a migrant worker at his Kneeland marijuana farm, committed suicide in federal prison on Sept. 22, according to the Associated Press. He was 35.

Wilde was convicted on a total of six charges in 2015, including murder in the commission of a narcotics offense and conspiracy for the 2010 murder of Mario Roberto Juarez-Madrid, and later sentenced to serve life in prison plus 35 years. He appealed the convictions but the Ninth Circuit United States Court of Appeals upheld them earlier this year.

According to the Associated Press article, Wilde was found unresponsive in his cell in Terre Haute, Indiana, on Sept. 22 and rushed to a nearby hospital, where he was pronounced dead four days later. The story quotes Vigo County Coroner Susan Amos as saying Wilde apparently hanged himself.

Wilde gunned down Madrid and Fernando Lopez at his sprawling 660-acre property in Kneeland on Aug. 25, 2010. The men, both employees of Wilde’s, had demanded to be paid for their work tending the more than 1,500 plants on the property and taken home. But Wilde was essentially broke at the time and under increasing financial pressure. He was $33,000 behind on mortgage payments on this house, which already had a $16,000 lien on it from the IRS. Sending the men away without paying them ran the risk of angering them and jeopardizing his grow operation, which he needed to bring to harvest to pay of his debts, including the $200,000 he owed his business partners. So Wilde told the men he’d pay them and take them home, but when he returned to the property to pick them up, he opened fire, wounding Lopez and executing Juarez-Madrid.

“The defendant hired illegal immigrants to work on his grow in the belief that they were expendable, not in a position to complain and that they might not be missed if they disappeared forever into the woods of Humboldt County,” the U.S. Attorney’s Office wrote in a pre-sentencing memorandum in the case. “When he could not pay them, he murdered one and tried to murder the other. The defendant preyed on their status and viewed them as free labor that could not stand up to him.”