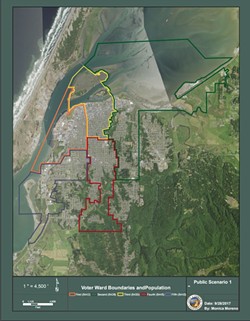 On Tuesday the Eureka City Council will decide whether to approve new ward boundaries under the city’s True Ward system and whether to move forward with a new transitional housing project spearheaded by Betty Chinn.

Included on the city’s consent calendar (items to be passed in one motion without discussion) are a change to the salary system for the city’s police chief, a renewal of the city’s partnership with Betty’s Blue Angel Village and the formal appointment of Police Chief Steve Watson.

Watson, whose annual salary as a captain in 2016 was $121,203, according to TransparentCalifornia.com, will be entering the position with a base salary of $135,713 and a standard at-will employment agreement. A new resolution, scheduled to be approved by the council along with his appointment, would institute a five step salary range for his position, with a 5-percent differential between steps, capping the chief’s salary at $149,625. Watson’s predecessor, Andrew Mills, earned $157,302 in 2016. The rationale for the change in salary classification, according to the language of the resolution, is that the police chief’s position is currently “the only city manager appointed at-will position without a five step range.”

Gary Bird, the city’s personnel director, emailed the Journal to clarify that while Watson’s salary is currently capped at $149K, the council has at times “authorized changes in compensation and benefits” and thus it might be subject to some loosening in the future. Watson’s position is classified as “unrepresented,” meaning he won’t be represented in collective bargaining by his agency’s union.

The Betty Chinn Foundation may also get a big boost from the city on Tuesday to continue current housing projects and launch a new effort to help the houseless. The current Blue Angel Village, a cluster of shipping containers at West Washington and Koster streets, was granted $75,000 in housing successor funds in September of 2016. The Village was launched concurrently with the clearing of the PalCo Marsh homeless encampment in May of 2016, and fell under the city’s “Shelter Crisis Resolution,” a heavily-debated decision to relax certain municipal codes in order to accommodate homeless housing. According to the shelter’s quarterly progress report, 92 homeless people were helped between June and August of 2017. One third of those clients accessed medical care, 19 percent received mental health services, 40 percent gained employment and 31 percent acquired housing.

This record of success may count in the Chinn Foundation’s favor as the city ponders a resolution to add an extra site to the Shelter Crisis Declaration. According to the language of the resolution coming before the council Tuesday, the new site will be on Hilfiker Lane, just north of the Greater Eureka Area Wastewater Treatment Plant, on an empty lot known as the “Crowley Property,” adjacent to the Hikshari’ Trail. Pacific Gas and Electric has offered to donate eight trailers formerly used as offices, which can be converted to transitional housing for “between 25 and 40 people.” City Manager Greg Sparks “has been working with the BKC Foundation to secure funding from Providence St. Joseph and the county for site work, utilities, and physical modifications of the trailers.” Its development will not be possible, however, unless the city issues an emergency Coastal Development Permit, which is permitted under the Shelter Crisis Declaration. The timeline is fairly close, with the deadline to install the trailers coming up on Nov. 1. Even if approved by the council Tuesday, it's unclear when "PG&E Village" would actually be open and housing residents.

Editor's Note: This piece was edited to reflect new information from Gary Bird which came in after it was originally published.