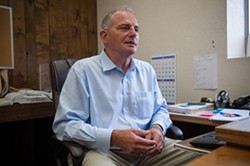 The Humboldt County Superior Court has set a hearing next month to determine whether embattled Public Defender David Marcus meets the minimum state qualifications to hold his job. But Patrik Griego, the attorney who brought the lawsuit challenging Marcus’ hire, is worried the county is engaging in a pattern of “gamesmanship” intended to delay the lawsuit until it becomes moot.

On Sept. 22, visiting Judge Marjorie Carter denied a county request to dismiss the lawsuit, which alleges Marcus didn’t meet the minimum state qualification for the position requiring any candidate to have been a “practicing attorney in all the courts of the state for at least the year preceding” his or her hire.

Marcus, whom the board of supervisors hired Feb. 8, was living in Florida at the time of his hire and had been primarily working as an insurance adjuster for the year prior. During a deposition in the case, Marcus testified that during that year he also worked as a contract attorney for the Walnut Creek law firm Cella, Lange and Cella, which is owned by his good friend, but conceded he didn’t appear in court or author any legal pleadings during that span. He also also testified that he had no contract with the law firm and no records of his hours worked.

The county contends that California’s decades-old statute simply requires Marcus to have been licensed to practice law in California for the year prior to his hire. Griego, on the other hand, is arguing that the statute requires him to have been a practicing attorney appearing in civil and criminal courts.

But Griego is growing concerned about the plodding pace of the case, especially now that the county has informed him it intends to depose all of the plaintiffs in the case — Sarah Caldwell, Eric Tschillard, Kate Green, Marilyn Andrews and 13 others whose identities are confidential — as well as almost all current and former employees of the public defender’s office who have worked underneath Marcus. A proposed schedule County Counsel Jeff Blanck sent Griego earlier this month seeks to spread 17 depositions over almost four months, with the first occurring Oct. 30 and the last on Feb. 22.

Griego told the Journal that he thinks the depositions are a delay tactic, looking to slow the case to make sure it’s still unresolved come the Feb. 8 anniversary of Marcus’ hire, at which point the county can argue the case is moot because Marcus will have been on the job a year. At that point, even if the case is decided in Griego’s favor, the board could simply reappoint Marcus.

“That’s what I think they’re trying to do,” Griego said. “I think they know that he’s not eligible and he wasn’t qualified and, once they realized the [motion for dismissal] didn’t work, that’s their next tactic is to say, ‘After a year he will be eligible, so let’s just hit the pause button until we have someone who is eligible.’ … It just makes them look bad. If they really wanted to do these depositions, they could do them in a day or two.”

Griego said he anticipates little of value to the case will come from the depositions as the case’s plaintiffs will have little to say bout Marcus’ work history or qualifications for the post — the matters at the heart of the lawsuit.

Blanck said he’s not sure what the petitioners know, which is why he needs to depose them and other witnesses in the case. And as to the contention that this is a delay tactic, Blanck said these processes typically take months, pointing out that it took Griego several months to schedule his deposition of Marcus.

“It would go a lot quicker if there weren’t 18 petitioners, but that was his choice,” Blanck said, adding that he plans on requesting a continuance in advance of the Nov. 13 hearing date.

The board of supervisors met in closed session Oct. 10 to evaluate Marcus’ job performance but took no action. Griego said that, in advance of the meeting, he sent Blanck on offer that he would waive any claim he has to the more than $125,000 in attorneys fees and costs he’s accumulated in the case — which the county could be liable for if the suit is successful — if the board “simply set aside its appointment” of Marcus. The county never responded, he said, adding that supervisors have also refused to meet with public defender employees who have alleged Marcus is unfit for the job.

Blanck confirmed that Griego made the settlement offer and that he took it to the board, but declined to comment further.