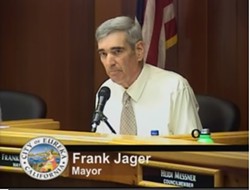 The Eureka City Council unanimously approved several hot-button issues on Tuesday night despite an unprecedented amount of pushback from Mayor Frank Jager and a smatter of spirited public comment.

The first item to be pulled from the consent calendar for discussion, and the least  controversial, was the official swearing-in of Police Chief Steve Watson. City Manager Greg Sparks, speaking about the decision to choose the former captain as Eureka’s top cop job, said it can be “difficult to recruit people into Humboldt County.” Of the 10 candidates for the position, Watson was the most qualified, according to Sparks.

“We decided to end the recruitment process when it became clear that Chief Watson was our best candidate,” said Sparks.

The council voted unanimously to accept Sparks’ recommendation and stood to applaud after Jager swore Watson in. After taking the oath of office, Watson said the appointment was “very humbling.” 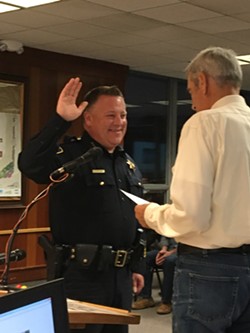 “I just want to thank you for your support,” he said, “not only for myself but for the Eureka Police Department, which has been so clear and so evident over the last few years despite the national turmoil and narrative that’s been out there and challenges we’ve had locally. I don’t take this lightly. I take this great obligation very seriously, and I pledge to serve the people of Eureka with integrity, with conviction.”


Citing the importance of community support and partnerships, Watson then handed out tee-shirts emblazoned with the slogan “Team Eureka” to the city council. Eureka Police Department Master Chaplain Andrew Broese Van Groenou then said a prayer over the new chief, asking that he be blessed with the “wisdom of Solomon [and] tenacity of David.”

After unanimously approving new ward boundaries, the council discussed adding a tract of land near the Hikshari’ Trail to its current shelter crisis declaration, which would open the way to allowing the Betty Kwan Chinn Foundation to establish what’s temporarily being called “Betty’s PG&E Village,” a transitional housing project that would use trailers donated by Pacific Gas and Electric. Several community members who own businesses near the trail spoke out in opposition to the idea, saying they continue to have problems with crime and theft in the area. Humboldt County Fire Chief Bill Gillespie also voiced concerns, saying that part of the property being considered is currently used for drills and training. City staff clarified that the vote was only to include the site in the shelter declaration and to appropriate $75,000 in housing successor funds to support the village, and more logistics would have to be explored by staff, with Sparks working with the county and St. Joseph Hospital to bring in more funding. Several councilmembers voiced empathy for the neighbors’ concerns, saying they believed Chinn’s track record with similar projects could mean the area would actually become more secure. Motion lights and other security methods were discussed.

Councilmember Marian Brady said it was evident that something needed to be decided or the donation from PG&E would be forfeited. After discussion finished and it was time for the council to vote, Jager dropped his first bomb of the evening.

In the Supervisors’ Sept. 5 meeting, supervisors Rex Bohn and Virginia Bass discussed the original offer from PG&E and its potential, saying staff would explore potential sites over the following two months but any option had to be close to services. Perhaps anticipating remarks like Jager’s, Bass pushed back against the idea that the county hasn’t been working with the city.

“If people only knew how many meetings we went to,” Bass mused. The Journal reached out to both Bass and Bohn to see if they had insight into what transpired between Sept. 5 and Oct. 16. Bohn declined to comment.

The council voted to unanimously approve amending the shelter crisis resolution and, pending further staff research, the new village is anticipated to launch in January of 2018.

The final item to draw debate was an amendment to the city’s marijuana ordinance, which would allow more permitted recreational dispensaries, with the built-in restraint that the council would only approve four per year, issuing a request for proposals every six months. Several owners of cannabis-related businesses spoke during public comment to thank the council for its progressive outlook on the industry, underscoring that they were implementing heavy security and safety measures for their businesses, and that the California regulations around medical cannabis meant only those 21 and over would be eligible to enter their businesses. This did not assuage the concerns of two parents who spoke against what they perceived as a dearth of limitations on the growth of the industry.

Cheryl Nunn, with tears visible in her eyes as she commented, said she and her husband had adopted five children “out of drug culture” and she despaired of the normalization of cannabis within city limits, where it would be “as commonplace as coffee shops on any corner.”

Jeff Poel, owner of EcoCann, the city’s first permitted dispensary, said this will be “the most regulated business in the city, if not the county.”

Prior to the council delivering its unanimous vote in favor of the ordinance, another Jager bomb.

Despite this discordant note, applause greeted the council’s vote, led in part by EcoCann co-owner Ray Markland, who later told the Journal he found the mayor’s remarks “inappropriate.”

Markland, who grew up in Eureka, said he sees cannabis as a potential solution to both the region’s opioid crisis and economic depression, with medical marijuana offering pain management solutions and legalized, regulated businesses creating new jobs. He knows there will be pushback, but says his business is committed to working with the city.

“There are always going to be opinions,” he said. “But the majority of Humboldt County, and California voters voted to support [cannabis legalization] Proposition 64.”