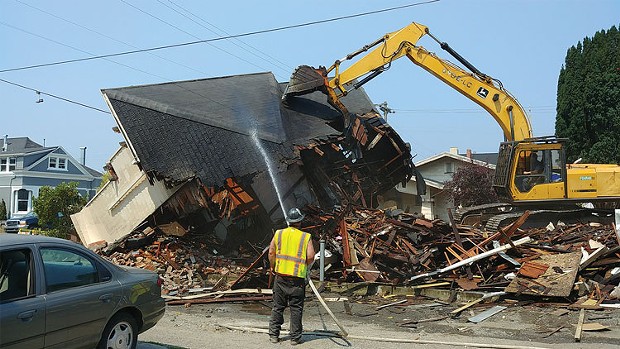 The city of Eureka originally selected Santa Monica-based attorney Mark Adams to help bring more than two dozen properties owned by Floyd and Betty Squires up to code. Now he’s hoping to see them auctioned off — and he intends to buy them himself.

If that were to happen on the scheduled Nov. 27 sale date, Adams says the lives of the people currently living in the assortment of homes and apartments owned by the couple would “change for the better.”

“Right now, that’s what’s intended,” Adams says in a phone interview from his Southern California office. “If we’re the successful bidder, then we would literally own the properties and we have a property management firm lined up to take over. … It’s not bravado to say people’s live are going to change for the better … We’re ready to go.”


The Squireses’ attorney, Bradford Floyd, has a different take, saying Adams’ “attempted” foreclosure of the couple’s properties “will be stopped.”

How things got here is a long and complicated story that dates back to 2011, when the city first filed a lawsuit seeking to wrest control of hundreds of rental units away from the couple, claiming their management was akin to that of “slumlords.”

By then, the Squireses had acquired 77 code violation actions in an eight-year span and accrued nearly $500,000 in citations, fines and special assessments.

Known as a receivership, city officials have described the legal action as an “extreme remedy” but one that was needed to immediately address pervasive issues with unsafe and substandard conditions at 26 of the Squireses’ properties located within city limits.

After years of legal wrangling that included numerous delays and appeals, Judge Dale Reinholtsen eventually appointed a third-party monitor — known as a receiver — to inspect the properties and order needed repairs.

Adams briefly served as that receiver twice in 2011, a role which now belongs to former county planning commissioner Jeff Smith, who was the Squireses’ preferred choice.

But in the interim, the Squireses filed a civil lawsuit against Adams, his son Andrew Adams and their company California Receivership Group, claiming they jumped the gun in reaching out to tenants before a final court order in the receivership case had been filed.

After a jury found in the Adamses’ favor last July, Mark Adams successfully petitioned the court to order the Squireses to reimburse him for the costs he incurred defending the trespassing suit and for work he did during his stint as the receiver six years ago.

In February, Reinholtsen ordered the Squireses to pay Adams just over $158,000 — a mixture of legal costs, fees and compensation for about four weeks of receiver work — then essentially authorized Adams to secure the money by using the 26 properties as collateral.

When the Squireses failed to pay the $158,000, Adams says he turned to the deed of trust he held on the properties to collect by filing what’s known as a “non-judicial” foreclosure, equating the situation to that of a homeowner who defaulted on their mortgage.

Barring judicial intervention, Adams says, the properties are now slated to be sold as a bundle Nov. 27.

“Squires has no one but himself to blame for this court order and these fees,” Adams says. “It’s just so typical that he can’t acknowledge the power of a court order. … I understand exactly how to litigate with these people at this point.”

Floyd, who has represented the Squireses for several years, says he disagrees with Adams’ analysis of the situation but declined to discuss any legal avenues he and his clients might be exploring.

The way Adams sees it, Squires has a few options at this point, including declaring bankruptcy or asking a judge to stay the foreclosure proceeding, saying “it would not be the first objectionable thing he’s done in this case.”

Neither, in Adams’ view, is viable.

“He didn’t make one effort to pay one dime of the judgement and I would suspect Judge Reinholtsen would not be sympathetic to him if he came in trying to stop the sale,” Adams says. “He should have just paid it.”

That still could happen but Adams says the bill has gone up by more than $100,000 in the meantime, between accrued interest and the expenses he and his company incurred trying to get paid.

That includes filing a July motion that is now pending before Reinholtsen in which Adams asked the judge to appoint a receiver to aid him in collecting his judgement, as well as additional amounts the Squireses owe to others if they join in the action.

In the court filing, Adams estimates the couple collects some $90,000 a month in rent from their properties while simultaneously running up a sizeable amount in outstanding debt, including $1.5 million in back property taxes, $300,000 owed to the city of Eureka and $650,000 to at least one mortgage lender.

“Without intervention by this Court via appointment of a post-judgement receiver, Squires(es) will continue to collect and use rents for their own accord instead of to maintain the properties properly and in accordance with California law and to pay their many judgements and other creditors, including the city of Eureka and Humboldt County,” the motion states.

Humboldt County Tax Collector John Bartholomew confirmed that the Squireses have several properties that are past the five-years delinquency point.

Brian Gerving, the city’s public works director who has been at the forefront of dealing with code issues at the Squireses’ properties, says he’s unsure whether the auction will actually take place at this point.

This year, the city has razed two of the Squireses’ properties and condemned a third.

“I would say that the city’s position is that anything that is going to increase the likelihood that the properties are rehabilitated and brought into compliance is a step in the right direction,” he says.

Adams, who has been appointed to oversee the rehabilitation of more than 100 properties in 11 counties by nearly 50 judges over the last decade, describes the Squireses’ case is the “most reprehensible we’ve ever been involved in.”

He says the “happy ending” would have been for Reinholtsen to have promptly appointed his receiver request, heard in August, to undo what he describes in his court motion as “a trail of devastation” that the Squireses have left in Eureka

But for now, the plan is to forge ahead with the foreclosure route.

“We are committed to getting the Squireses’ properties cleaned up, however we can do it,” Adams says.

Kimberly Wear is the assistant editor and a staff writer at the Journal. Reach her at 442-1400, extension 323, or kim@northcoastjournal.com. Follow her on Twitter @kimberly_wear.

This article appears in the Nov. 9, 2017 edition of the Journal.