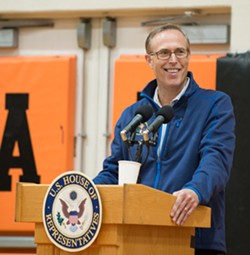 After years of being cagey about his religious beliefs, the 53-year-old Democrat told the Washington Post that he’s become alarmed this year with the appearance of religion in policy-making, which pushed him to announce that he is a non-religious humanist. The Post describes humanism as “a loose philosophy based on the idea that humans should work to improve society and live ethically, guided by reason, not necessarily by anything supernatural.”

The Huff followed up with an announcement on his Facebook page in which he notes that he still thinks “religion has nothing to do with my service in Congress” and that he’s not pushing his views on anyone or “judging anyone else’s religious choice.”

“I value my working relationships and friendships with people of faith, the interfaith community, spiritual seekers and all sorts of secular, non-religious people,” Huffman wrote. “I think we should all work together to make the world a better place. It shouldn't be much of a story in the year 2017 that a member of Congress is openly humanist, but we’ll see.”

But, as the Post notes, the announcement is kind of a big deal, citing “experts in religious identity in Congress” who believe Huffman is only the second member of Congress ever on record as describing his or her “ethical system as not being God-based.” Currently, only nine of the 535 members of Congress decline to state their spiritual beliefs on official background questionnaires. In his Facebook post, Huffman indicates he’s not alone as a non-believer in Congress: “For the closet humanists, agnostics and atheists out there (including many of my colleagues in Congress — yes, we talk about these things!), maybe this will show that it’s OK to just say what you believe and that there’s room in American politics for people with secular, nonreligious views.”

This isn’t the first time a national to-do has been made of Huffman’s beliefs. The then-freshman congressman got famously grilled on The Colbert Report in 2014, with the host jokingly noting he may be “hell-bound.” Check out the Colbert video below and see the Washington Post story here.