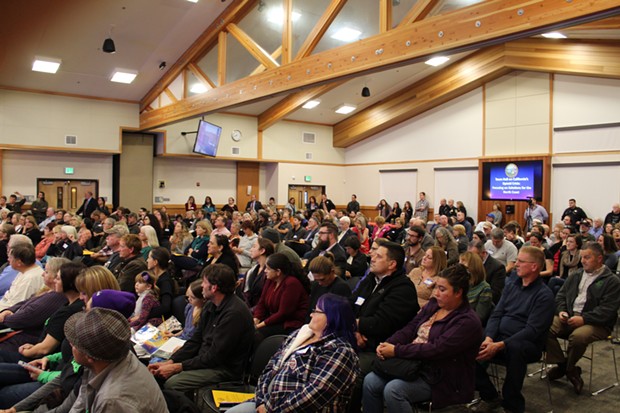 The meeting saw presentations from a handful of local and state officials on the opioid epidemic and a host of questions from the public, most of them centering around the safe disposal of hypodermic syringes locally.

Bass said the center will focus on opioid education as well as finding treatment for its clients. The center will be one of two dozen new “Hub and Spoke” clinics in California. The clinics’ model is an adaptation from Vermont’s system, which has drawn national praised for its opioid addiction work. Bass said she expects to see Humboldt’s hub start to come to fruition in a couple months.

Bass also addressed the topic of needle disposal, which — judging by the questions from audience members — is clearly of public concern. Bass said in the next couple months a number of kiosks will be installed around Eureka purely for the safe disposal of needles. “This is something we have to embrace as a community issue in order to make a change,” she said.

Eureka Police Chief Steve Watson said the “needle tsunami” sweeping across the city could see some relief in the coming months. He said his department has been working with local health service entities to tighten up the flow of needles into the city. Watson didn’t disclose what specific steps the department has taken.


As we’ve previously reported, there’s a growing frustration in Eureka especially with discarded needles, which has drawn some public ire at harm reduction needle exchange programs run by the Humboldt Area Center for Harm Reduction and the county Department of Health and Human Services. Based on a Journal analysis, the two entities combined to give out more than 425,000 needles through the first half of 2017. Even with the approximately 90 percent needle return rate both groups report, that leaves some 7,000 needles unaccounted for each month.

McGuire mostly acted as the town hall’s facilitator but not before addressing his constituency.

“Humboldt is not alone ... Few issues have created as much controversy among our neighbors as this,” he said. “As the controversies grow, the problems deepen.”

“Addiction is not a moral failing. It is a brain disease. We cannot arrest our way out of this problem,” she said, adding that, according to state statistics, 74 percent of people who use opioids were at some point able to get them from friends or family. This led Perez to her final message for the audience, listing several ways individuals can help turn around the opioid crisis.

“Dispose [properly] of your prescriptions, educate your children and reduce the stigma around this disease,” she said.

“The vast majority of these people own homes and their average age is 50,” he said.

“The vast majority of these people own homes and their average age is 50.” — Humboldt County Public Health Officer Donald Baird tweet this
Willard Hunter, chief medical director of the Open Door Community Health Center, explained the practice of Medication Assisted Treatment or MAT, which combines behavioral therapy with addiction medication to help treat opioid and other drug addictions. Hunter said MAT is the best route to treat moderate to severe opioid addictions because it helps people deal with withdrawal in a more paced, and medically monitored, way. Hunter said 600 to 700 Open Door patients currently receive MAT.

Lisa Dugan, director of the North Coast Regional Department of Child Support Services, addressed the crowd on a personal level. Dugan talked about her daughter, Allison Dugan, who will soon be released from federal prison after having fallen into the vicious cycle of opioid addiction. “She’s one of the most kind-hearted people I know,” Dugan said, recalling her bright personality. Dugan said her daughter accepted opioids from a co-worker while she working at Costco, coaxed into the idea that the pills would provide a harmless lift to a hard job. The cycle of addiction soon followed. “If this were any other illness, people would have been bringing us casseroles,” Dugan said.

“If this were any other illness, people would have been bringing us casseroles.” — Lisa Dugan tweet this
Statistics show Dugan’s story is far from unique. California’s reported an average opioid overdose rate of 4.6 per 100,000 residents in 2016. That same year, Humboldt County’s rate was almost five times that, at 22.4 overdoses per 100,000 residents, the second highest per-capita rate in the state.  Additionally, McGuire said Humboldt County physicians prescribe 80 to 90 percent more than opioids than the state average.

Nationally, 64,000 people died due to opioid overdoses in 2016, making it the leading cause of death for people under the age of 50, Perez said.

Humboldt clearly has a disproportionate opioid problem in the face of a national epidemic.

McGuire ended the town hall by committing to hold another meeting in several months, with the hope of showcasing progress made in the fight against opioid abuse in Humboldt.

“Hold our feet to the fire,” McGuire urged the crowd.