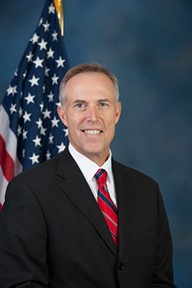 Huffman released the statement with Mike Thompson, who represented Humboldt County and the North Coast for 14 years until redistricting bumped him to California’s Fifth Congressional District in 2012, which he has represented since.

President Donald Trump declared a disaster Oct. 10 in response to California’s wildfires, which scorched more than 220,000 acres, destroyed thousands of structures and killed more than 30 people. But the administration’s $44 billion request for disaster relief from Congress on Friday did not earmark any funds for California, incensing Huffman and Thompson.

“For the Administration to not request even a single additional penny to help rebuild the communities devastated by the worst fires in California’s history is mind-boggling,” the two congressmen said.

But it wasn’t just Californians who found things not to like about the request. Apparently concerned by the rising cost of relief — the new request brings the total this year to close to $100 billion, most of it going to hurricane-ravaged areas — the administration’s request suggests offsetting the disaster assistance funding allocation with budget cuts, offering a menu of options that included slicing $3.9 billion from student financial aid and $1 billion from transportation infrastructure.

While the deficit is sizeable — totaling $666 billion for the fiscal year — some have pointed out the apparent disconnect between the administration’s push to offset disaster relief spending with cuts and its support of a tax plan that the Congressional Budget Office estimates would raise the deficit by $1.7 trillion.

In their statement, Huffman and Thompson call on their House colleagues to throw the administration’s “offensive request in the trash” and launch a bipartisan effort to bring relief to all Americans impacted by the recent hurricanes and fires. See their full statement copied below.

Washington, D.C.- Today, the Office of Management and Budget delivered its request to Congress for supplemental disaster relief funding following recent disasters across the country. While the request includes anemic supplemental funding for states ravaged by hurricanes, it contains no funding whatsoever for rebuilding the communities in California devastated by the recent wildfires. Congressmen Jared Huffman (CA-02) and Mike Thompson (CA-05) released this statement:

“This is a new low for this Administration. Either they have forgotten about the thousands of American citizens who’ve lost everything in the California fires, or they just don’t care,” said Reps. Thompson and Huffman. “For weeks, Democrats and Republicans have told the Administration in specific detail what resources Californians need to begin to recover and rebuild. Today, it’s clear those requests have just been ignored. This is outrageous, unacceptable, and a dereliction of the Administration’s duty to help the people of California.

“For the Administration to not request even a single additional penny to help rebuild the communities devastated by the worst fires in California’s history is mind-boggling.

“Meanwhile, coastal communities from California to Alaska have been waiting all year for fishery disaster relief funding, another bipartisan request that was ignored in this White House proposal.

“In the absence of responsible leadership from the President and his Administration, we call on House leadership to throw this offensive request in the trash and work in a bipartisan manner to deliver adequate disaster relief to all Americans who’ve been impacted by the recent hurricanes and fires.”