Body of Missing Canadian Found by His Father 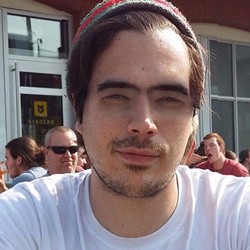 The body of a Canadian man who was reported missing nearly two weeks ago was found by his father on Monday in a heavily vegetated area of the Arcata Marsh, according to the Arcata Police Department.

Felix Desautels-Poirier, who would have turned 26 on Dec. 27, was traveling through the area with a friend from Quebec when he went missing. According to a family friend, they were camping at the marsh and she woke up on Nov. 7 to find all Desautels-Poirier’s belongings, including the eyeglasses he needed due to severe nearsightedness, but he was gone.

At this time, officials say, no foul play is suspected. An autopsy has been scheduled.


Detective Sgt. Todd Dokweiler said APD officers searched the area where Desautels-Poirier was found as did the Humboldt County Sheriff’s Office search and rescue team, which conducted a two-day survey that included dragging the lake at the marsh, while the Coast Guard assisted with fly-overs to no avail.

Dokweiler said the efforts were hampered by dense reeds and other vegetation that made it difficult to access some of the areas by boat and on foot.

“His friends that were here with him and his family that came down were very helpful in the search and provided a lot of assistance to us, which we appreciated,” he said.

Dokweiler said over time bodies that may have been submerged and difficult to see will, in most cases, eventually come back to the surface and “it appears that’s what happened in this case.”