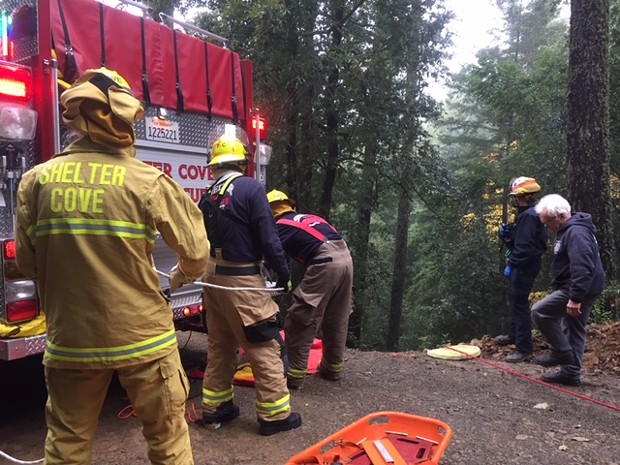 Cheryl Antony, public information officer of Shelter Cove Volunteer Fire Department confirmed that a person has died after a car drove off a steep embankment on Chemise Mountain Road off Shelter Cove Road in Shelter Cove today. Cause of death has yet to be confirmed by the coroner, and the name of the deceased has not yet been released. Antony says one of the car's occupants estimated the time of the accident to be around 1 a.m. Passersby may not have seen the vehicle, which was stopped against a tree some 100 feet down from the road. Antony says it was not until one of the car's seven passengers "climbed up top and walked a mile to a house with a telephone and called for help" that the fire department got the call at 7:40 a.m.


The all-volunteer department was slightly short-handed as a couple of its crew are away for the Thanksgiving holiday, but 7 members were able to make it to the scene and assist. Four of the passengers were able to make it up to the road on their own, however, two others were aided by the firefighters and members of the Southern Humboldt Technical Rescue Team.

This brings Humboldt County's road fatalities to 28 so far for 2017.