Again With the Crab 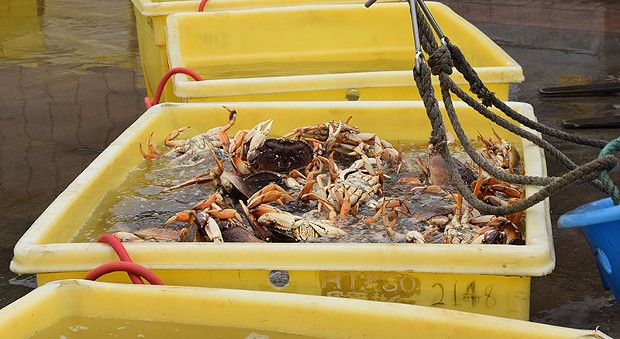 Bad news, local Dungeness crab lovers. The California Department of Fish and Wildlife is delaying the commercial season in Mendocino, Humboldt and Del Norte counties for at least 15 days due to poor crab quality.

The fishery is now currently set to open Dec. 16 to let the crustaceans fill out a bit. A second round of testing is set to take place next week.

On the bright side, the recreational season is under way, although the California Department of Public Health cautions against eating the guts of crab — AKA the “butter” — caught in certain areas due to elevated levels of domoic acid — which, as most of us will remember, all but destroyed the 2015 season.

Press release from the California Department of Fish and Wildlife:


Due to poor crab meat quality test results conducted at the beginning of November, the Director of the California Department of Fish and Wildlife (CDFW) has issued a memo delaying the opening of the commercial Dungeness crab season in Fish and Game Districts 6, 7, 8 and 9 (Mendocino, Humboldt and Del Norte counties) for a minimum of 15 days until Dec. 16, under authority of Fish and Game Code section 8276.2. Crab quality tests ensure that crab are filled out enough prior to harvesting and follow the testing guidelines established by the Tri-State Dungeness Crab Committee that is overseen by the Pacific States Marine Fisheries Commission.

"We are trying to schedule a second round of testing to take place before Dec. 7 to determine whether the fishery can open Dec. 16 or will need to be further delayed," said CDFW Environmental Scientist Christy Juhasz.

If quality tests remain low, CDFW Director Charlton H. Bonham has the authority to delay the season an additional 15 days. The season cannot be delayed beyond Jan. 15 due to crab quality as mandated in section 8276.2 of the Fish and Game Code.

Please refer to CDFW's Frequently Asked Questions about the Commercial Dungeness Crab Fishery for the 2017-18 season.

Recreational crabbing remains open statewide. There are two areas of the coast in northern California where the California Department of Public Health advises consumers not eat the viscera (internal organs, also known as "butter" or "guts") of crabs due to elevated levels of domoic acid. These areas include Laguna Point, Mendocino County northward to Humboldt Bay North Jetty, Humboldt County, and the Klamath River mouth, Humboldt County northward to the Oregon border.