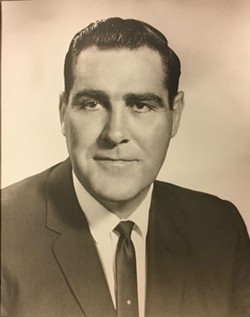 He was known as the sheriff who never carried a gun; the man whose laugh you could hear ringing across the building.

Today marks the 35th anniversary of Former Humboldt County Sheriff Gene Cox’s death. Cox was killed in the line of duty in 1982, just four weeks before he was set to retire, the last Humboldt County law enforcement officer to be killed by a suspect.

On that deadly Monday afternoon, Cox stopped by the Ebb Tide RV Park on his way home from work to help his father-in-law, park manager Jack Alton, handle a dispute with a distraught resident. The resident, Clarence Eugene McCutcheon, confronted Cox with a rifle, fatally shooting him. McCutcheon shot and killed two others in the rampage, Alton and former local education official Claire Montgomery. When officers with the Eureka Police Department arrived on scene, McCutcheon again opened fire. He was later fatally wounded in a shootout with Eureka Police officers.

“I was out hunting when my wife called me and told me the news,” Retired HCSO Detective Sergeant Dave Walker said. “It was heartbreaking.”


Sheriff Cox hired Dave Walker as a deputy Sheriff in 1973.

“He was a big guy, always smiling and laughing,” Walker said. “Sheriff Cox never carried a gun. He always had it in his glove box.”

Cox’s law enforcement career began in the early 1950s at the Arcata Police Department. He joined the Sheriff’s Office in 1954, was promoted to undersheriff in 1962 and was elected sheriff in 1966. He was re-elected three times, serving as the Humboldt County Sheriff for 16 years.

“I don’t know if anyone could run against him and beat him,” Walker said. “Things were steady, the manpower was good. He ran a tight ship, but was highly respected both within the office and in the community.”

Sheriff Gene Cox's name is inscribed in the National police officer memorial, located in Washington D.C.,one of 21,000 names of peace officers killed in the line of duty in the United States.

Samantha Karges wrote this in her capacity as the public information officer for the Humboldt County Sheriff's Office.