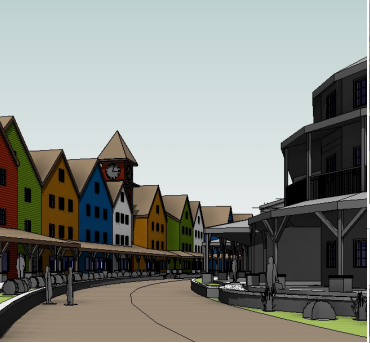 The Eureka City Council voted in favor of several waterfront projects Tuesday night, including the commitment of city funds to complete Waterfront Drive between G and J streets and authorizing staff to negotiate a lease-to-buy option for 11 acres east of Halvorsen Park with a developer who would like to build an upscale RV park and mixed-use development. Both motions passed unanimously, with Councilmember Austin Allison absent.

The completion of Waterfront Drive, as was noted in a presentation by Public Works director Brian Gerving, has been in the works for "years and years and years," first initialized by city staff in 2005 when the council approved a project study report.

Currently drivers and pedestrians cannot continuously navigate Waterfront Drive and have to detour around a block between the Adorni Center and G Street. Staff is still in the process of finishing the right of way process and expect to have that done by February of 2018. State funding from the California Transportation Committee is expected in March of 2018, with the entire project costing $3.3 million. The city's engineering staff has found several funding streams to make up that amount, with the city committing a portion yet to be decided. After some discussion, the city council voted in favor of the extension, which will allow staff to seek money from the State Transportation Improvement Program. Completion of Waterfront Drive — tentatively scheduled for October — will also bridge one of the last remaining gaps in the bay trail.


The development of an area east of Halvorsen Park, currently owned by the city, garnered some pushback in public comment. Eureka's director of Parks and Recreation, Miles Slattery, presented the option to sell the property to T. Schneider Enterprises as a necessary step to shore up the city's harbor fund, which is "running at a deficit of $1.8 million." The purchase of the property and ongoing Transient Occupancy Tax revenue generated by T. Schneider's project could make up the harbor division's deficit. T. Schneider was the lone entity to submit a proposal to the city; it also owns and operates Shoreline RV park.

An "upscale RV park" on the east side of the Samoa Bridge would be the first phase of the project, with its completion marking the point that T. Schneider would then be able to purchase the other section and begin the second phase, including a hotel and commercial, residential and office space.

Councilmember Heidi Messner said her constituents were concerned about RV users being long-term tenants, which Slattery and Travis Schneider both denied would be an issue. Schneider also responded to a question from Councilmember Kim Bergel about whether  there was an age limit on the RVs. Schneider said there was a 10-year age limit on RVs with some allowance for vintage vehicles that were in good condition.

Bergel added that development in the area might actually decrease problems with crime, trash and vagrancy. Councilmember Natalie Arroyo said the long-reaching impacts of the decision gave her pause but she ultimately "has faith" in the city's staff. There will be additional opportunities for public input as the project moves through the planning commission process.