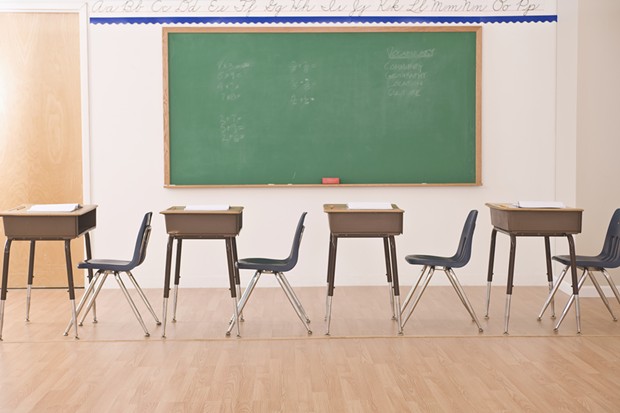 Editor’s note: This story was updated from a version posted this morning to include additional information and text of the draft proposal.

Humboldt County’s long-standing tradition of allowing parents to choose where their children go to school will likely see some changes next year under a tentative agreement reached by area superintendents this week.

Office of Education Superintendent Chris Hartley said the draft set to go before most — if not all — the county’s school boards next week “embraces the concept of open enrollment” but includes the addition of strict timelines parents would need to meet to register in schools located outside their home districts.

While the process is currently open all year, under the draft agreement reached Dec. 6 parents or guardians would need to make a transfer request during an “enrollment window” of Dec. 1 to Feb. 1.

The home district would then have up to 10 days after the Feb. 1 deadline to approve or deny requests and forward any approvals on to the district of choice, which has until mid-February to accept transfers.

But there is a caveat in the draft agreement that allows home districts to deny a request if a parent or guardian “does not participate in a DOR Reasonable Enrollment Information Activities, absent good cause.”

Those reasonable activities include: “a discussion with school administration/designee, orientation meeting, site visitation, or informational literature.”

Parents can appeal a denial to the county Board of Education.

The basic idea, Hartley said on Thursday, is to strike a balance between preserving school choice and giving districts the ability to better plan for staffing and other needs by knowing how many students to expect in their classrooms.

For example, state education code requires districts to notify employees about potential staff reductions in March, a decision that depends heavily on how many kids are expected to walk through the doors the following year.

“Folks are trying to use some common sense here with this thing and make it accessible to parents who are looking to utilize an interdistrict transfer,” Hartley said, emphasizing the specifics were still be worked out.

Humboldt had operated for years under a sort of free-wheeling system that allowed students to attend any school in the county — regardless of where they lived — simply by filling out an application that was generally accepted as a matter of course if a campus had enough room.

That philosophy was cemented by a five-year open enrollment agreement between the districts — the longest allowed under state law — that expired in June, bringing the region’s 32 superintendents back to the negotiation table with Hartley acting as a mediator.

While the draft does not include caps on how many students a district can admit from outside its district boundaries — a proposal Eureka City Schools Superintendent Fred Van Vleck floated last February, setting off a firestorm of controversy — there is a provision for schools with wait lists.

(The Journal is seeking clarification on whether those restrictions apply to incoming students or students placed on the wait list itself.)

At the time Van Vleck proposed the caps, the superintendent made clear in a letter to his staff that ECS was seeking a serious shift in the status quo, noting that the ESC board had placed a "high priority on lowering the number of parents sending their students to different districts” when he was hired.

An estimated 13 percent of Humboldt County’s 18,000 school-age children — or 2,340 students — take advantage of the open enrollment policy. Of those, around 800 — or 34 percent — live within Eureka’s boundaries, according to data presented to the ECS board this year.

And that migration doesn’t just translate to an empty in a classroom — each child also takes with them an estimated $8,000 a year in state funds. For ECS, the total loss was an estimated $6.4 million.

Part of the issue for Eureka also centered on an apparently lax application of the open enrollment agreement, with some districts failing to enforce the requirement that home districts sign off before a student can be accepted as a transfer. (Students attending charter or private schools are exempted from that condition.)

And that migration doesn’t just translate to an empty in a classroom — each child also takes with them an estimated $8,000 a year in state funds. For ECS, the total loss was an estimated $6.4 million. tweet this
Things apparently came to a head over at ECS last winter when the Cutten School District brought over 130 inter district requests for students it had already enrolled but Van Vleck said his district had not been aware of.

Cutten settled the matter with Eureka City Schools back in July, agreeing to pay $260,000 to avoid a potential lawsuit over the reporting failure. About a quarter of Cutten’s students are transfers with the vast majority — around 75 percent — coming out of ECS.

That dichotomy of how districts are impacted by transfers — and ensuring an accurate accounting of those numbers — were focal points of discussions on the agreement, which have been ongoing monthly for nearly a year, according to Hartley.

With a draft in hand, superintendents are heading back to their respective boards to gauge their responses before reconvening as a group sometime around the third week of December with the goal of coming to a consensus on a final policy.

“We’re looking forward to that opportunity to have an agreement in place so we can say, ‘Here it is,’ and then begin an awareness campaign at that point,” Hartley said.
If approved, the agreement will go into effect for the 2018-2019 school year with a review slated to take place in September of 2018, the goal of which is to "work on a multi-year agreement that takes into consideration the impacts of the countywide IDT process marketing campaign," the draft states.

Read the full release from the Humboldt County Office of Education below:


Humboldt County School District Superintendents have been meeting monthly throughout this past calendar year to come to agreement on interdistrict attendance enrollment for the 2018-19 school year and beyond. In a meeting on December 6, Superintendents settled on a draft agreement and are now awaiting feedback based on discussions with their respective boards.
Dialog has centered on maintaining an open enrollment policy in Humboldt County. Key topics of the conversations and draft agreement have included:
• Maintaining an open enrollment window;
• A specific process and timeline for interdistrict request approvals;
• A process for interdistrict renewals;
• Strategies for implementing the interdistrict enrollment process
“This process has shown to be collaborative with the Superintendents demonstrating a willingness to make compromises while also representing the best interests of their districts and students,” stated Dr. Chris Hartley, superintendent of Humboldt County schools. “I anticipate the next steps will include scheduling an opportunity to come back together to further debrief district feedback relative to reaching a formal agreement.”

Locally defined Enrollment Priorities: Districts will maintain enrollment priorities according to their district’s Board Policies when considering approving Interdistrict Transfers for students outside of their attendance boundary. Examples may include the following: sibling(s) attend, children of staff member, family had older sibling previously attend the school, as well as others locally defined.

Importance of Enrollment Numbers in Next Year’s Staffing: Districts recognize that this agreement structure is a departure from historic process and further recognize that a county-wide IDT process marketing strategy will be critical to this agreements success. Further, most Districts benefit from knowing what their projected enrollment will be by early February to determine if lay-off notices are warranted. With a March 15 deadline for teacher layoff notices, many districts need to do the analysis and bring the recommendation to their Trustees at the February Board meeting. Districts will agree to the following “Open Enrollment” timeframes when considering accepting Interdistrict Transfers. The timeframes will identify priorities of enrollment as follows:

A. December 1 – February 1 Enrollment Window - To be given approval by the DOR, IDT requests need to be received at the DOR from the parent/guardian by the first day of February at 4pm each year. If either of these days falls on a weekend, the actual day will be the next school day.

B. The DOR will have 10 school days after the close of the window to approve the request and forward the request to the DOA. DOR may deny a parent/guardian request for an IDT if the parent/guardian does not participate in a DOR Reasonable Enrollment Information Activities, absent good cause. Reasonable Enrollment Information Activities include a discussion with school administration / designee, orientation meeting, site visitation, or informational literature. All forms will be approved by the DOR assuming parent/guardian does not withdraw form after meeting with DOR.

C. The DOA will have 15 school days after the close of the window (or 5 school days after receipt of the request from the DOR if not received within the 10 school day window in B above) to approve or deny the request and notify requesting party and DOR of decision affording both the DOR and DOA the opportunity to consider the impact of these decisions relative to the March 15th layoff notification deadline and have the necessary time to prepare Board Packets and hold a regularly scheduled Board meeting or special Board meeting if necessary.

D. Renewals and new sibling requests (students who will have a sibling enrolled in the same school year) will be approved and will follow the same timelines listed above. Renewals may be required to participate in Enrollment Information Activities based upon DOR school level transitions (e.g. DOR from elementary school to middle school or middle school to high school).


Priority 2 –
A. IDT requests received from parent/guardian after February 1 will receive approval by the DOR due to the following circumstances. Parent/guardian may be required to participate in Enrollment Information Activities as outlined in Part B of Priority 1. The DOR has 30 days to approve or deny IDT requests received after February 1. If approved by the DOR, requests will be approved or denied by the DOA within 30 calendar days.

For schools with wait lists: If a student has received an approved IDT from the DOR, it will be valid until the commencement of the DOA’s new school year. This is to allow students on a DOA wait list time to determine if there is capacity. The DOA is limited to accepting the equivalent of 2 students per grade level or 7% of their total enrollment, whichever is greater on a wait list. The wait list must be established at the time of the DOA’s lottery or capacity determination.

The countywide agreement will be in effect for the 2018-19 school year with a review of this agreement to occur September of 2018 by District superintendents. The collective goal will then be to work on a multi-year agreement that takes into consideration the impacts of the county wide IDT process marketing campaign.

Regardless of the duration of the permit, the permit may be revoked pursuant to the policies and regulations of either of the districts, as permitted by law.