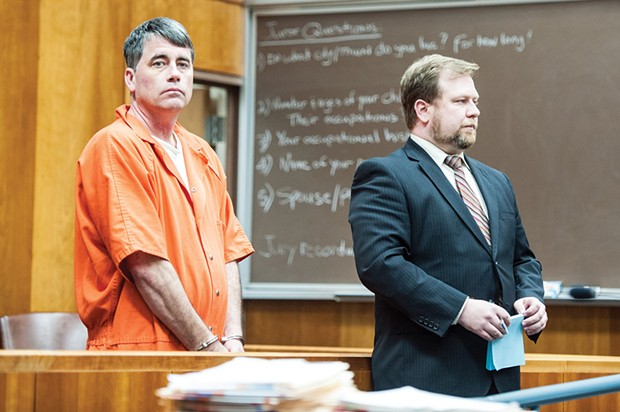 In unusually swift turnaround, the decision came down less than a week after oral arguments were presented Dec. 6 in a San Francisco courtroom with the judges summarily rejecting claims that Bullock’s Miranda rights were violated and evidence did not support his torture conviction.

“In our view, the trial court could reasonably infer from the extent and pattern of wounds that torture was not merely the means of killing Father Freed, and that torture was not merely incidental to the killing of Father Freed,” the unpublished opinion states. “Rather, the severance of the tongue and other injuries were inflicted for the separate objective of causing extreme pain. Substantial evidence supports the trial court’s ruling.”


In April of 2016, a jury convicted Bullock of a total of seven charges, including first-degree murder, torture, carjacking and attempted arson stemming from the slaying of beloved local priest Eric Freed in the St. Bernard's Catholic Church rectory on New Year’s Day, 2014. He is currently serving two life sentences without the possibility of parole in Pleasant Valley State Prison. The appeal alleges that Humboldt County Superior Court Judge John T. Feeney erred in allowing Bullock's statements to detectives to be entered into evidence, that evidence didn't support the torture conviction and that prosecutors overcharged the case. If the appeal is successful on the first point, it could send Bullock back to Humboldt County for a retrial.

During Wednesday’s hearing, the justices largely focused on whether detectives violated Bullock’s Miranda Rights during an interview after his arrest and if he said anything substantive after the alleged violation. They seemed skeptical.

While investigators interrogated Bullock the day after Freed was killed, he asked, “Can I see a lawyer?,” to which Eureka Police detective Ron Harpham reportedly responded by standing in silence for several seconds. “The detective started to do the right thing,” said Victor Morse, the state appellate attorney representing Bullock, adding that after the pause, Bullock again began to speak to Harpham, who made no attempts to end the interrogation. "The detective had no intention to honor the request to see a lawyer."

“You’re asking us to read a lot into 10 or 15 lines,” Justice Sandra Margulies told Morse after he asked them to examine Bullock’s words closely. Morse argued that Bullock was trying to end the interrogation but the detectives wouldn’t let him.

While an oral argument hearing is a chance for both attorneys to convey their case, it’s also an opportunity for the justices to question their merits. “He still keeps talking and the detective keeps listening,” Justice Robert Dondero said.

The justices agreed that it wasn’t a clear violation of Bullock’s Miranda Rights, but they also said they wouldn’t be reviewing the case if the Humboldt County District Attorney’s Office hadn’t submitted the particular section of the interview into evidence during Bullock’s trial. By entering the interview into evidence, Morse said, prosecutors discredited the idea that Bullock, who’d been released from jail 60 miles from home in the middle of the night, could have broken into the rectory in search of shelter, which could have changed whether the jury thought Bullock's broke into the rectory with the intent to commit additional crimes.

“The words that follow re-engage the two officers,” Rivlin said. “He was still talking.”

She argued that Bullock understood his rights and did not attempt to clarify his request for a lawyer. She said Bullock questioned the detectives in an attempt to figure out what evidence the officers had against them. “It’s all part of the context that rendered this situation ambiguous,” Rivlin said.

The secondary argument in Bullock’s appeal, which was only touched on briefly in oral arguments but will be reviewed by the justices, is whether the charges facing Bullock were repetitive, charging him with different crimes for the same conduct. Morse also argued that evidence presented at trial didn't support the torture conviction. Rivlin countered, telling the justices that the wounds on Freed’s body were plenty of evidence to determine Bullock tortured Freed for hours.

If the justices find that detectives did violate Bullock's Miranda Rights, they could order a retrial in the case. The other appellate issues could result in a sentencing modification but Bullock would still face a life sentence without the possibility of parole.

Judging from the justices' comments, Morse left them unconvinced on the appeal's most crucial argument.

“I just don't see this as a violation of Miranda vs Arizona in this case,” Margulies said bluntly.

The case was last in the afternoon following four others. Only one person remained in the audience by the time Bullock’s case was called. Larry McNeil, a resident of both Eureka and San Francisco, sat a little straighter when the attorneys began arguing.

“I wanted to come here and just witness what was happening and I am glad I came,” McNeil said in the lobby following the hearing.

McNeil, a retired IBM specialist, said he and his wife often attended St. Bernard's to hear Freed speak. He said they started to volunteer with the church and worked under Freed many nights, including the night before he was killed.

“I think we were the last ones to see him alive,” McNeil said. “He was absolutely an incredible man,” McNeil said reflecting in the lobby. “He couldn’t ever be replaced. There aren’t that many people like him.”