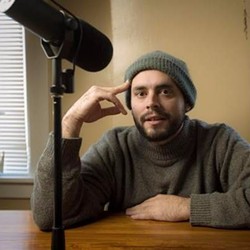 John Sepulvado, host of San Francisco public radio station KQED's California Report, is reporting from KHSU this week. The California Report is broadcast on public radio stations across the state. This morning, KQED aired an interview with Humboldt County Sheriff William Honsal in which he talked about the impact of prison realignment on local jails, saying that people who would normally sober up and receive services in the Humboldt County correctional facility are instead being released onto the streets in the midst of mental health crises, creating a situation that looks like "the walking dead."

In a phone interview, Sepulvado says he doesn't see Gordon as just "someone that's high on the street and worthy of judgement" but, rather, as a person enduring a mental health crisis and not receiving the services he needs.

"The problem with methamphetamine has not gone away here," Sepulvado told the Journal. Sepulvado studied at College of the Redwoods for a semester in 1998 and says he is invested in exposing the "disintegration of our rural communities."

In a previous broadcast, aired Wednesday, Dec. 13, Sepulvado describes Humboldt County as being "rich in natural beauty and not much else." Future broadcasts will include an interview with Michelle-Charmaine Lawson, the mother of slain HSU student Josiah Lawson, college students who are experiencing homelessness and a successful local fisherman. He also intends to "share a little serenity with the state" by broadcasting for 30 seconds from within the quiet of a local redwood grove.