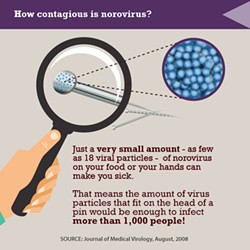 Humboldt County health officials are warning parents about an apparent norovirus outbreak that struck more than 130 students in the South Bay Union School District, along with several staff members this week.

The district announced today that it is closing its three campuses beginning Monday and running through Winter Break.

“This precautionary measure will prevent additional student and staff exposure to norovirus," Superintendent Gary Storts said in a release. "The health and safety of our students and staff is our top priority. Campus closures will ensure the time needed to deep clean both campuses before students return to school on January 8, 2018, and resume our efforts to read, lead, and succeed.”

The highly contagious virus that causes vomiting and other miserable conditions can be difficult to contain due to its resistance to most disinfectants. A similar outbreak in counties to our south earlier this year hit upwards of 4,000 people, eventually spreading from Woodland to West Sacramento and Davis, despite several school closures and extensive decontamination efforts, according to a Humboldt County Department of Health and Human Services news release.

The public health laboratory has confirmed that the virus is in play locally with additional tests being conducted today.

Health officials are recommending the usual round of preventative measures to help stop the spread, including staying home when ill, frequent hand washing and cleaning potentially infected surfaces with strong disinfectants, such as bleach.

“We are working quickly to help our local schools prevent further illness, particularly as we near the holiday break,” Public Health Director Michele Stephens said in the release.

Read the full DHHS releases below:


More than 130 students from the South Bay Union School District are sick from what Public Health officials believe to be a norovirus outbreak centered at Pine Hill School and affecting nearby South Bay and South Bay Charter schools.

One hundred and thirty-two students of 489 enrolled in the three-school district are out today. One hundred and one students were absent Thursday, while 88 missed school on Wednesday.

An unknown number of staff members are also sick. The Public Health Laboratory in Eureka has confirmed the presence of the highly contagious virus, which causes nausea, fever, vomiting, stomach pain and explosive watery diarrhea. Additional laboratory testing will be conducted today. Officials have already documented cases of transmission from students to parents and other family members, so the number of current cases is likely higher.

Infected people typically show symptoms within 12 to 48 hours of exposure to the virus. Contagion is believed to last at least 24 hours after recovery. According to the Centers for Disease Control and Prevention (CDC), the virus causes an acute inflammation of the stomach and intestines.

People catch the virus by accidentally ingesting stool or vomit from an infected person. This typically happens by consuming contaminated food or liquids, touching contaminated surfaces or objects and then putting your fingers in your mouth, or sharing food or utensils with someone who is infected. Parents, staff and children are strongly encouraged to go home from school or work if they have any sign of illness, and to remain there at least 24 hours after all symptoms have subsided. There is no cure for norovirus, which generally passes on its own within a few days.

The CDC notes that it cannot be treated with antibiotics, because it is a viral, rather than bacterial, infection. Drinking lots of fluids is recommended to replace those lost during the course of illness. Hand washing is the best defense. Wash hands frequently throughout the day with soap and water. Hand sanitizing gels and wipes are ineffective against the virus. Clean contaminated surfaces thoroughly with a strong disinfectant such as bleach. Even then the virus is often extremely difficult to contain. It can survive on surfaces for weeks, and few disinfectants are effective against it.

An outbreak in Yolo County earlier this year sickened an estimated 4,000 people, and despite exhaustive decontamination efforts resulted in the closure of several schools. The illness spread from Woodland to schools in West Sacramento, Winters, Esparto and Davis, including U.C. Davis.

Public Health officials are working side by side with the staff and superintendent of Pine Hill and South Bay schools, who have pledged their full support in combatting the spread of illness. Department of Health & Humans Services’ Public Health Director Michele Stephens said, “We are working quickly to help our local schools prevent further illness, particularly as we near the holiday break.”


After further discussion between district and Public Health officials, South Bay Union School District will close its three schools, all currently impacted by a norovirus outbreak. The closure will run from Dec. 18 through 22, with the winter break beginning immediately after that.

This decision was bolstered Friday afternoon by an additional pair of positive tests for norovirus related to the outbreak.

South Bay Union School District Superintendent Gary Storts announced the closure to staff and parents this afternoon, stating, “This precautionary measure will prevent additional student and staff exposure to norovirus. The health and safety of our students and staff is our top priority. Campus closures will ensure the time needed to deep clean both campuses before students return to school on January 8, 2018, and resume our efforts to read, lead, and succeed.”