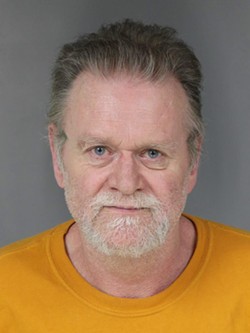 Update: The Humboldt County Coroner’s Office has identified the pedestrian killed in Eureka last night as Dwight Stephen Davis, often known in the community as “Dirty Dave.” He was 71.

Previously:
The death of a pedestrian in Eureka last night marks Humboldt's 31st traffic fatality of the year, officially tying a previous record for the deadliest year in traffic fatalities.

The pedestrian, whose name has not yet been released, was struck by a vehicle near Winco on the 600 block of West Harris Street at around 5:51 p.m. The driver of the vehicle, Gary Joel Cudney, 61, was arrested and booked on suspicion of vehicular manslaughter and driving under the influence.

For more information about our dangerous roads, here's a link to our 2015 cover story that explores why we have one of country's highest vehicle fatality rates.

The Humboldt County Coroner’s Office has identified the victim of a fatal vehicle versus pedestrian traffic collision on Dec. 14, 2017 near the 600 block of W. Harris Street. The victim, 71-year-old Dwight Stephen Davis, also known to the community as “Dirty Dave,” of Eureka, succumbed to his injuries at St. Joseph Hospital around 7 p.m. last night. Anyone with information on this incident is asked to call Officer Linfoot with the Eureka Police Department at (707) 441-4060.

On 12-14-2017 at about 5:51 pm, officers of the Eureka Police Department were dispatched to the 600 block of W. Harris Street for a vehicle versus pedestrian injury traffic collision.

The pedestrian was transported by City Ambulance to St. Joseph’s Hospital for treatment of his injuries and died shortly after arriving at the hospital.

The driver of the involved vehicle, identified as Gary Joel Cudney (61 years old of Eureka), was contacted and exhibited objective signs of being under the influence.

As a result of the investigation, Cudney was taken into custody and booked on charges of vehicular manslaughter and driving under the influence. He is being held on $100,000 bail.

The pedestrian’s identity is being withheld pending notification of next of kin by the Humboldt County Coroner’s office.

This is an ongoing investigation and any further details will be released when they are available. Anyone with information on this case is urged to contact Officer Linfoot at 707-441-4060.