Remembering Those Lost in the Helicopter Crash of the '64 Flood 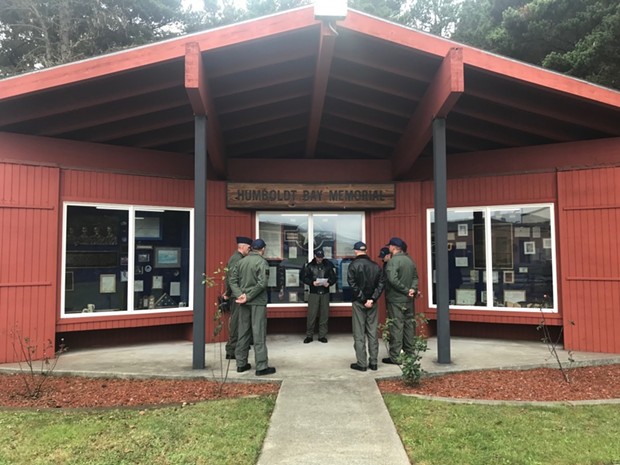 The Coast Guard held a ceremony today to honor those killed on this date 53 years ago when the helicopter they were in went down in severe weather during a rescue mission amid the devastating flood of 1964.

They were among the 24 people, including 19 in Humboldt County, who lost their lives in the disaster after a massive storm some 500-miles wide unleashed torrents of water down on the North Coast, swelling already swollen rivers that washed away whole towns, never to be rebuilt.

Many lives were forever changed by those terrifying four days in December of 1964, when it seemed like the rain would never stop. Amid the fear and the destruction, there were also great acts of courage and generosity as neighbors helped neighbors and strangers risked their lives to save others.

Here are some of those stories from the Journal’s coverage of the flood’s 50th anniversary in 2014.


MCKINLEYVILLE, Calif. — The Coast Guard held a memorial service at Strawberry Rock in Trinidad, Friday, to honor the crew and passengers of the CG 1363, an HH-52 Seaguard helicopter that crashed in a severe storm there during a rescue operation Dec. 22, 1964.

On Dec. 22, 1964, the helicopter crew was dispatched to Humboldt Bay, where roads were closed from flood damage, to assist with evacuations. At 2:48 p.m., the helicopter arrived in the Humboldt Bay area where Hansen, a local resident, volunteered to join the crew to help spot flood survivors and to help orient the crew to local landmarks. The helicopter crew, along with Hansen, began evacuating people from roof tops and flood areas, ultimately saving 10 lives.

At 6:03 p.m., weather conditions worsened and the Arcata Airport Flight Service Station (FSS) received a radio call from the helicopter, which was trying to land with three rescued people aboard in low visibility and high winds. Approximately eight minutes before the radio call the airport had lost power, disabling the radio navigation beacon that was necessary to navigate to the airport.

FSS instruments indicated that the helicopter was northwest of the airport. The controller continued to radio the pilot steering directions to help him land.

The pilot reported that he was at 1,000 feet and asked if that altitude would clear all obstructions along his path to the airport. The FSS controller replied that 1,000 feet might be inadequate due to high terrain just east of his bearing. A citizen living 12 miles north of the airport along the coast reported seeing a helicopter about one mile off shore and heading south. FSS attempted to relay the report to the pilot but could not regain communications. Repeated calls to the helicopter were met with silence.

Three days after losing contact with the crew of CG 1363, a U.S. Navy helicopter from the U.S.S. Bennington located the crash and directed ground search parties to the site. The helicopter had crashed on a slope at 1,130 feet of elevation nine miles north of the Arcata Airport near a landmark today known as Strawberry Rock. Located with the wreckage were seven dead; the three crewmen, Hansen, two women and an infant girl.