UPDATE: Sheriff IDs Teenage Boy Who Died After Being Hit by Car 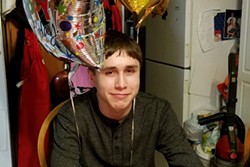 UPDATE: The minor has been identified as Elias Silva. His family has established a crowdfunding site to help pay for the teenager's funeral expenses. That can be found here.

A teenage boy has died after being hit by a car on Saturday, Dec. 30, just before 11:30 p.m., according to the California Highway Patrol.

The teen, who was running along Hurst Road onto Walnut Drive, apparently ran directly into the path of the driver. The CHP reports the conditions were wet and foggy at the time of the accident, with visibility down to 800 feet. DUI is not considered a factor.

His death marks the 35th traffic-related death in 2017, a grim record for Humboldt County.

According to CHP, the woman driver stopped her car, called 911 and blocked the roadway to protect the boy, who later died at St. Joseph Hospital. The 17-year-old's name has not been released.


EUREKA, Calif. – On the night of Saturday, December 30, a vehicle versus a pedestrian results in one fatality.

At the time of the collision the roadways were wet and the visibility was limited to approximately 800 feet due to the fog. For reasons still under investigation, the juvenile ran out into the direct path of the Honda. The juvenile initially collided with the right front of the Honda and then the west raised curb.

Johannsen remained at the scene, called 911 and blocked the roadway to protect the juvenile. The City Ambulance of Eureka responded to the scene and transported the juvenile to St. Joseph Hospital for medical treatment. At the hospital the juvenile succumbed to his injuries. DUI is not a factor.

Anyone with information related to this collision is encouraged to contact the California Highway Patrol at 707-822-5981.