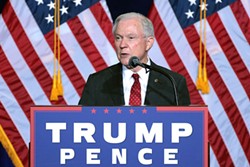 Just days after recreational cannabis became fully legal in California, U.S. Attorney General Jefferson Beauregard Sessions announced Thursday that he is rescinding an Obama-era policy that directed the Department of Justice to take a hands-off approach to marijuana in states that have set their own laws.

The policy, implemented since 2013, is known as the Cole Memo and directed U.S. Attorneys not to expend limited resources on prosecuting cannabis businesses and users in states that have legalized or decriminalized marijuana for medical or recreational purposes.

Sessions, a zealous critic of marijuana who infamously said marijuana is only “slightly less awful” than heroin and that “good people don’t smoke marijuana,” has also lobbied Congress to oppose the Rohrabacher-Farr Act, a longstanding budget rider prohibiting the Justice Department from spending federal funds prosecuting medical marijuana in states where it is legal, which now number 29. The spending provision, which has to be renewed annually, is currently in limbo as Congress hasn’t yet passed a federal budget.

“By rescinding the Cole Memo, Jeff Sessions is acting on his warped desire to return America to the failed beliefs of the ‘Just Say No’ and Reefer Madness eras. This action flies in the face of sensible public policy and broad public opinion. The American people overwhelmingly support the legalization of marijuana and oppose federal intervention in state marijuana laws by an even wider margin. This move by the Attorney General will prove not just to be a disaster from a policy perspective, but from a political one. The American people will not just sit idly by while he upends all the progress that has been made in dialing back the mass incarceration fueled by marijuana arrests and destabilizes an industry that is now responsible for over 150,000 jobs. Ending our disgraceful war on marijuana is the will of the people and the Trump Administration can expect severe backlash for opposing it.”


A Gallup poll released late last year found that 64 percent of Americans now support the federal legalization of marijuana, including a majority — 51 percent — of Republicans.

On the campaign trail, President Donald Trump repeatedly said he thought medical marijuana laws should be left for states to decide. But when signing a short-term spending bill back in May that continued the Rohrabacher-Farr Act, Trump included a signing statement indicating he would “treat this provision consistently with my constitutional responsibility to take care that the laws be faithfully executed,” which many in the cannabis industry took as a sign the president was rethinking his stance.