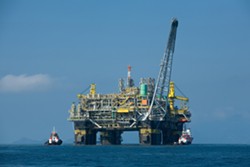 This morning the Trump administration announced  sweeping plans to increase offshore oil drilling around the country, including in Northern California.

U.S. Secretary of the Interior Ryan Zinke released the draft five-year plan, which would potentially see a combined 47 site leases auctioned off in the Gulf of Mexico, Atlantic Region, Pacific Region and off the coast of Alaska from 2019 through 2024. The plan  represents a marked escalation of the executive order Donald Trump signed back in May that aimed to expand offshore drilling in the Arctic and Atlantic oceans. It has been cheered by the oil and gas industry but is already facing fierce opposition from a bipartisan group of lawmakers and conservation groups.

“Secretary Zinke’s announcement today confirms that the Trump administration is hell-bent on trampling the public interest and further lining the pockets of Big Oil at the expense of clean air, clean water, and the health of the American people,” Huffman said. “Californians will never let this happen. Our state has shown that we can have a growing economy along with environmental protections, and we have made it very clear, again and again, that we do not want to put our fisheries, our beaches, or our coastal economies at risk just to enrich the fossil fuel industry. The bottom line is that offshore drilling means oil spills, and the risk is even higher now that the Trump administration is weakening offshore safety rules. This reckless proposal for a new offshore drilling spree should face widespread, bipartisan opposition. We’ll fight them in Congress, on the beaches, in the courts, and at the ballot box. I’m confident we’ll defeat this dangerous plan.”

Lawmakers from both sides of the aisle in Maryland, South Carolina, North Carolina, Delaware, New Jersey and Florida have also spoken out on the proposed plan. The draft plan will now go through a months-long public review process.

In a press conference today, Zinke said the draft plan is a clear departure from the Obama administration’s protectionist approach to the nation’s coastlines. “We’re embarking on a new path for energy dominance in America, particularly offshore,” Zinke said. “This is a clear difference between energy weakness and energy dominance. We are going to become the strongest energy superpower.”

See the full press releases from Zinke and Huffman’s offices copied below (as well as Huffman’s Facebook post on the subject), and click here for a Washington Post story on the proposal, which features a quote from Surfrider Foundation Policy Manager and Journal contributor Jennifer Savage, noting that polls indicate there’s “a significant majority willing to push back against” those who would threaten the beaches that are important to California’s economy and quality of life with offshore drilling.

WASHINGTON – U.S. Secretary of the Interior Ryan Zinke today announced the next step for responsibly developing the National Outer Continental Shelf Oil and Gas Leasing Program (National OCS Program) for 2019-2024, which proposes to make over 90 percent of the total OCS acreage and more than 98 percent of undiscovered, technically recoverable oil and gas resources in federal offshore areas available to consider for future exploration and development. By comparison, the current program puts 94 percent of the OCS off limits. In addition, the program proposes the largest number of lease sales in U.S. history.

“Responsibly developing our energy resources on the Outer Continental Shelf in a safe and well-regulated way is important to our economy and energy security, and it provides billions of dollars to fund the conservation of our coastlines, public lands and parks,” said Secretary of the Interior Ryan Zinke. “Today's announcement lays out the options that are on the table and starts a lengthy and robust public comment period. Just like with mining, not all areas are appropriate for offshore drilling, and we will take that into consideration in the coming weeks. The important thing is we strike the right balance to protect our coasts and people while still powering America and achieving American Energy Dominance"

Earlier this year, 155 Members of both the U.S. House and U.S. Senate sent letters to Secretary Zinke in support of a new 5-year plan that recognizes America’s potential for energy dominance.

The Draft Proposed Program (DPP) includes 47 potential lease sales in 25 of the 26 planning areas – 19 sales off the coast of Alaska, 7 in the Pacific Region, 12 in the Gulf of Mexico, and 9 in the Atlantic Region. This is the largest number of lease sales ever proposed for the National OCS Program’s 5-year lease schedule.

“By proposing to open up nearly the entire OCS for potential oil and gas exploration, the United States can advance the goal of moving from aspiring for energy independence to attaining energy dominance,” said Vincent DeVito, Counselor for Energy Policy at Interior. “This decision could bring unprecedented access to America’s extensive offshore oil and gas resources and allows us to better compete with other oil-rich nations.”

Release of the DPP is an early step in a multi-year process to develop a final National OCS Program for 2019-2024. Today's draft proposal was informed by approximately 816,000 comments from a wide variety of stakeholders, including state governments, federal agencies, public interest groups, industry, and the public. Before the program is finalized, the public will have additional opportunities to provide input. The 2017-2022 Five Year Program will continue to be implemented until the new National OCS Program is approved.

“This plan is an early signal to the global marketplace that the United States intends to remain a global leader in responsible offshore energy development and produce affordable American energy for many decades to come,” said Katharine MacGregor, Principal Deputy Assistant Secretary for Land and Minerals Management. “This proposed plan shows our commitment to a vibrant offshore energy economy that supports the thousands of men and women working in the offshore energy industry, from supply vessels to rig crews.”

Inclusion of an area in the DPP is not a final indication that it will be included in the approved Program or offered in a lease sale, because many decision points still remain. By proposing to open these areas for consideration, the Secretary ensures that he will receive public input and analysis on all of the available OCS to better inform future decisions on the National OCS Program. Prior to any individual lease sale in the future, BOEM will continue to incorporate new scientific information and stakeholder feedback in its reviews to further refine the geographic scope of the lease areas.

“American energy production can be competitive while remaining safe and environmentally sound,” said Acting BOEM Director Walter Cruickshank. “Public input is a crucial part of this process, and we hope to hear from industry groups, elected officials, other government agencies, concerned citizens and others as we move forward with developing the 2019-2024 National OCS Program.”

The Outer Continental Shelf Lands Act requires the Secretary of the Interior, through BOEM, to prepare and maintain a schedule of proposed oil and gas lease sales in federal waters, indicating the size, timing, and location of leasing activity that would best meet national energy needs for the five-year period following Program approval. In developing the National OCS Program, the Secretary is required to achieve an appropriate balance among the potential for environmental impacts, for discovery of oil and gas, and for adverse effects on the coastal zone.

BOEM currently manages about 2,900 active OCS leases, covering almost 15.3 million acres – the vast majority in the Gulf of Mexico. In fiscal year 2016, oil and gas leases on the OCS accounted for approximately 18 percent of domestic oil production and 4 percent of domestic natural gas production. This production generates billions of dollars in revenue for state and local governments and the U.S. taxpayer, while supporting hundreds of thousands of jobs.

The DPP proposes 19 lease sales in the Alaska Region (3 in the Chukchi Sea, 3 in the Beaufort Sea, 2 in Cook Inlet, and 1 sale each in 11 other program areas in Alaska). These 11 program areas consist of the Gulf of Alaska, Kodiak, Shumagin, Aleutian Arc, St. George Basin, Bowers Basin, Aleutian Basin, Navarin Basin, St. Matthew-Hall, Norton Basin, and Hope Basin. No sales are proposed in the North Aleutian Basin Planning Area that has been under Presidential withdrawal since December 2014.

In conjunction with the announcement of the DPP, the Department is also publishing a Notice of Intent (NOI) to prepare a Draft Programmatic Environmental Impact Statement (EIS), in accordance with the National Environmental Policy Act.

Public meetings will be held around the country starting on January 16, 2018, to receive comments on the DPP and to inform the Draft Programmatic EIS. Specific dates, times, and venues will be posted on BOEM’s website at https://www.boem.gov/National-Program/.

The DPP and the NOI will be available for public comment for 60 days following the publication of the documents in the Federal Register.

For more information about the National OCS Program, including maps, please visit: http://www.boem.gov/National-Program/

Washington, D.C.- Congressman Jared Huffman (D-CA) slammed the Trump administration’s proposal to allow a dangerous oil drilling spree off the coast of California, as well as across American waters in the Pacific, Atlantic, Arctic, and Gulf of Mexico.

“Secretary Zinke’s announcement today confirms that the Trump administration is hell-bent on trampling the public interest and further lining the pockets of Big Oil at the expense of clean air, clean water, and the health of the American people,” said Rep. Huffman. “Californians will never let this happen. Our state has shown that we can have a growing economy along with environmental protections, and we have made it very clear, again and again, that we do not want to put our fisheries, our beaches, or our coastal economies at risk just to enrich the fossil fuel industry. The bottom line is that offshore drilling means oil spills, and the risk is even higher now that the Trump administration is weakening offshore safety rules. This reckless proposal for a new offshore drilling spree should face widespread, bipartisan opposition. We’ll fight them in Congress, on the beaches, in the courts, and at the ballot box. I’m confident we’ll defeat this dangerous plan.”

Rep. Huffman is also the author of the Stop Arctic Ocean Drilling Act, which has been cosponsored by 60 members of the House of Representatives. He recently led 69 members of Congress in urging Interior Secretary Ryan Zinke to protect the Arctic Ocean from dangerous activities by the oil & gas industry and to exclude all new Arctic Ocean lease sales from any future offshore drilling plan.