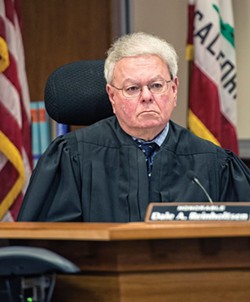 Dale A. Reinholtsen is preparing to finish his 21-year career as a Humboldt County superior court judge. The press release from the court sets his retirement date for the end of December, when his current term will come to a close.

Reinholtsen has presided over several high-profile Humboldt County cases, including a 2002 suit by the county against landowner Bob McKee, accused of violating the Williamson Act, the fight for Ferndale Enterprise editor Caroline Titus to recover her attorney fees after winning a successful public records act request case against the Humboldt County Fair Board, and the prolonged battle of the city of Eureka to force local property owners Floyd and Betty Squires to come into compliance with building codes. Reinholtsen and Judge Christopher Wilson, both widely respected in the courthouse, were also admonished by the California Commission on Judicial Performance in 2016 for failing to decide their cases on time and allegedly submitting false affidavits to the state and receiving their salary in violation of California law.

The looming retirement adds to what has been a busy stretch in judicial chambers in the courthouse and means another new face will join the likes of Greg Elvine-Kreis and Kelly Neel, both appointed by Gov. Jerry Brown to the bench last year, with another vacant judgeship still awaiting Brown's attention.