Another One Leaves the Bench: Judge Feeney to Retire 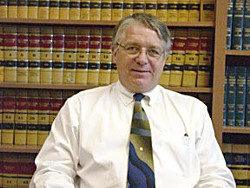 Judge John T. Feeney today announced he is retiring effective Feb. 28 after more than 20 years on the bench in Humboldt County.

Over the years, Feeney has presided over some of the region’s most notorious cases, including the 2016 murder trial of Gary Lee Bullock, who was convicted in the brutal torture death of beloved Eureka priest Eric Freed.

“To have been entrusted with the duty and obligation to seek to render right and sensible decisions for two decades as a judicial officer has been both rewarding and humbling,” Feeney said in a court press release. “Thank you for this amazing opportunity.”


The announcement comes just two days after the court released a statement noting that Judge Dale Reinholtsen would be stepping down when his term comes to an end in December, opening the local bench to another set of new magistrates in the coming months.

Gov. Jerry Brown appointed local attorneys Greg Elvine-Kreis and Kelly Neel to judgeships last year — replacing the retired Bruce Watson and Timothy Cissna, respectively. Meanwhile, there is the vacancy created by Marilyn Miles retirement awaiting an assignment from the governor, who will also be tasked with tapping Feeney's replacement, as he is retiring before his term comes to a close.

Read the full release from the Humboldt County Superior Court below:

Judge John T. Feeney has announced his retirement from the Humboldt County Superior Court effective February 28, 2018, after serving for more than 20 years. Judge Feeney has expressed that it has been an honor and privilege to serve the citizens of Humboldt County as a judge, saying, “To have been entrusted with the duty and obligation to seek to render right and sensible decisions for two decades as a judicial officer has been both rewarding and humbling. Thank you for this amazing opportunity.”

Presiding Judge Joyce Hinrichs commented on the announcement saying, “I would like to thank Judge Feeney for his many years of dedicated service to our Court. I, and the rest of the Court staff, wish him well in his retirement. We are pleased that he will be applying to the Assigned Judges Program so we will be able to continue to utilize his expertise.”

Judge Feeney received a Bachelor of Arts degree in Biology from the University of California, San Diego; a Master of Science degree in Criminalistics from California State University, Los Angeles; and a Juris Doctor degree from Loyola Law School (Los Angeles).

During his tenure on the bench, Judge Feeney has participated in the following: a) creation of two mental health court programs; b) lecturer at Crisis Intervention Training for law enforcement personnel for ten years; c) creation of, and presiding judge of Humboldt Homeless and Caring Court since its inception in 2006 to present; d) trustee of Humboldt County Law Library for approximately twelve years; e) served on the Appellate Divisions of both Humboldt and Del Norte County Superior Courts; and f) presiding judge of Humboldt County Superior Court for 2007-2008.

Judge Feeney is most appreciative of the support and friendship of his co- workers, past and present, with the Courts.