January 31, 2018
comment
The Humboldt County Sheriff's Office released a comprehensive report Monday which shows that deaths due to alcohol and other drugs continue to rise. The report, compiled by HCSO public information specialist Samantha Karges and Humboldt County Coroner's Office legal office assistant Brent Ferguson and reviewed by the Humboldt County Department of Health and Human Services, examined all "unattended deaths" in the county over the last three years. Unattended deaths are cases in which the coroner is called in to investigate the cause of death.

The report confirms a grim trend: Deaths due to alcohol and other drugs have steadily increased over the past three years, taking 49 lives in 2017. Chief Deputy Coroner Lt. Ernie Stewart says this upward trend is consistent with what he's seen over his 24-year career with the Humboldt County Sheriff's Office, adding that while the public is paying more attention right now to the opiate crisis, methamphetamine continues to be the biggest factor in drug-related deaths for Humboldt residents.

"Methamphetamine is still killing more people than opiates," Stewart said in a phone interview. "I believe that methamphetamine has carved out its place in our community and it's just not going away." 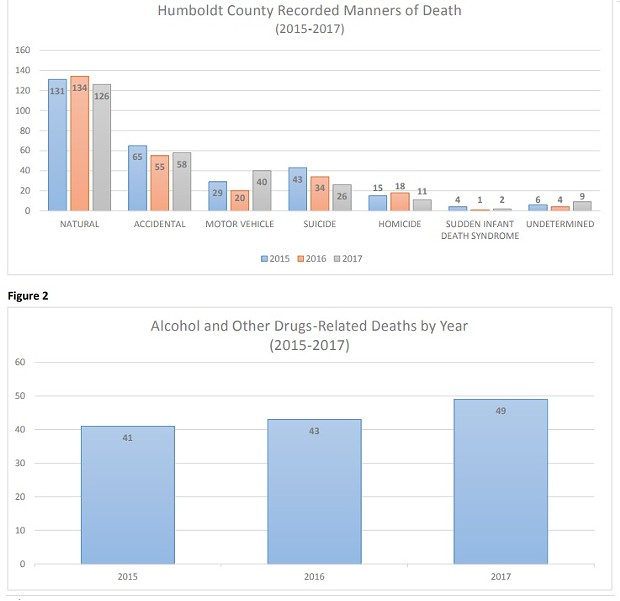 A nervous system stimulant, methamphetamine can cause a toxic reaction in the body that increases heart rate and blood pressure. Stewart said he believes the new opiate treatment center announced by state Sen. Mike McGuire in November is a good step, but more education and funding for treatment is necessary. Reaching children in schools to break the cycle of addiction will make a big impact, Stewart says. But as a historically impoverished county, funding for such programs may be hard to find. And law enforcement agencies, typically on the front lines of the issue, don't have all the answers.

"All the studies have proven, you can't arrest your way out of this problem," Stewart said. "It's a very complex issue."

Stewart also believes that drugs and alcohol play a role in our high suicide rate, which accounted for 26 deaths in 2017 (down from 43 in 2015 and 34 in 2016). The California Department of Public Health ranked Humboldt County sixth in the state per capita for suicide. Almost all of the suicide cases that have come across his desk involve a person who also tested positive for some kind of substance, Stewart said. The solution to the multi-faceted issue will require money and persistence but he believes that success could prove exemplary to other regions with the same problem.

"Humboldt County, we are at the forefront of the problem," Stewart said. "If we figure out how to solve the problem in our county, the rest of the counties should find it pretty easy."

The full report is available below.