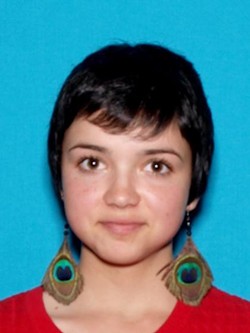 When our story broke yesterday that one of the "Humboldt 35" – people on the California Attorney General's database listed as missing from Humboldt County – was not only safe and sound, but vying for a rose on national television, it was greeted by a variety of responses, and a lot of questions. The most pressing question: How did Martinez's name end up on the California Attorney General's website as a missing person, when she was clearly alive and well and active on social media during the time period she was supposedly missing? The answer to that question says a lot about how our system for reporting and investigating missing persons does – and doesn't  –  work.

Bekah Martinez herself helped our story go viral, retweeting it with the words "MOM. How many times do I have to tell you I don't get cell service on the Bachelor??" This year's season of the popular show started filming Sept. 20, according to Insider, and wrapped up around the end of November. On Nov. 18, Martinez's mother reported her missing, saying she was last seen Nov. 12, and her listing was active on the Attorney General's website as of Jan. 18, our "point in time" for capturing the Humboldt 35. Martinez's mom apparently reported her as having come to Humboldt to work on a cannabis farm. Whether she left The Bachelor set to come to Humboldt (Spoiler alert, Bachelor Nation), just offered the story as an alibi while she was wrapping up filming or the timeline is just wonky, we don't know.

The sheriff's office sent out a detailed press release this morning saying that a deputy sheriff had emailed Martinez's mother Dec. 12 and confirmed that her daughter was safe and well. Bekah Martinez apparently called her mother on Nov. 18 to say that she was on her way home. So, why was her name still on the database? According to the sheriff's office, deputies attempted to call Martinez directly several times but were unable to speak with her.

"As part of procedure, Humboldt County Sheriff’s Office deputies are typically required to make direct contact with the missing person to confirm status and wellbeing, as geographical and other factors allow," the press release, prepared by HCSO public information officer Samantha Karges, stated. "A deputy was not able to make direct contact with Martinez and she was not removed from the Missing and Unidentified Persons System."

We have reached out to the Attorney General's Office to determine why Martinez's case remained on its database, when the sheriff's office has previously stated that the OAG only carries cases in which there is an active homicide investigation. This was clearly not the case with Martinez, as she was safe and sound and active on Twitter and Instagram over the time she was listed as missing. (We asked the sheriff's office if investigators check social media during missing persons cases, Karges said they do but she "cannot comment on whether or not that was a tool used" in Martinez's case.)

We also asked the AG for numbers on how many people have been cleared from the system over the last year, and will update when we have answers to those questions. Bekah Martinez is the second person who has been cleared from the system since our cover story about missing persons went to print, as another man, Daniel Ogden Stromberg, called and said he had been living a few blocks from the Eureka Police Department the entire time his family had been looking for him. Neither Martinez nor Ogden had been taken down from the AG database as of 12:30 p.m. today.

Since this story has gone viral on Twitter, the Journal's story has been picked up by The New York Times, Vanity Fair, Golf Digest and many other national publications. When we originally began investigating this story we wanted to know why we have the highest rate per capita of missing persons reports in the state. We found that a lot of people come up to Humboldt and fail to tell their families that they're safe and sound, apparently including some who are semi-famous. 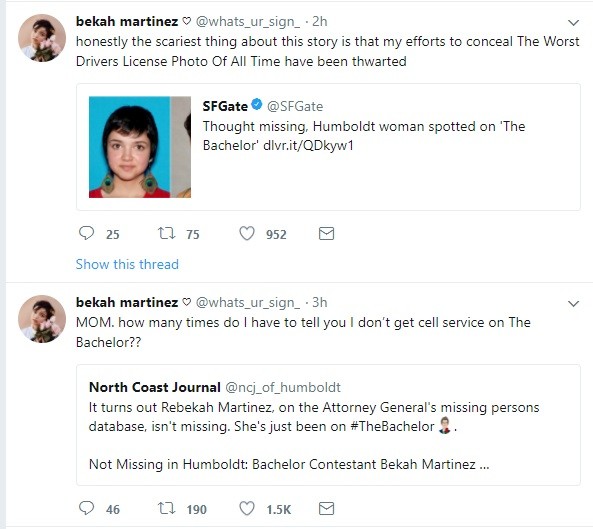 On Nov 18, 2017, at about 1:06 a.m., the Humboldt County Sheriff’s Office received a missing persons report for 22-year-old Rebekah Martinez. The reporting party, Martinez’s mother, told deputies she last had contact with Martinez on Nov. 12, 2017, at about 11:00 a.m. via a friend’s cell phone. Martinez told her mother that she was going to work on a marijuana farm and would see her in seven to eight days.

On Dec. 12, 2017, a deputy sheriff contacted Martinez’s mother by email to inquire whether she had heard from Martinez. Martinez’s mother responded to the email confirming that Martinez had contacted her late
in the afternoon on Nov. 18, 2017, and stated that she was headed home. The deputy requested Martinez to contact the investigator of the case as soon as possible.

The deputy then reached out to Martinez’s mother as to why Martinez had not contacted the Sheriff’s Office as requested in December. The deputy was informed that Martinez had attempted to contact the Sheriff’s Office but was not able to speak directly with a deputy. At this time, Martinez’s attempts to contact the Sheriff’s Office have not been confirmed. The deputy provided Martinez’s mother with her direct phone number and requested Martinez call the deputy immediately. Martinez returned the deputy’s call at 2:59 p.m. on Feb. 1, 2018, confirming that she was not missing and was doing well. Based on the totality of information provided regarding Martinez’s wellbeing, Martinez status as a missing person was cleared over the phone and she was removed from the Missing and Unidentified Persons System.