On Monday night, Bryan Hall, executive director of the Eureka Rescue Mission, received a call from the house manager of the men's shelter.

"There was a man dropped off in a wheelchair with one leg, no hands and a colostomy bag with nowhere to go," Hall wrote on Facebook. "Needless to say, we brought him in and took care of him and tended to his needs. I met him this morning and he is a very nice man and has had a very rough life. Hopefully, we will be able to connect him with services that will suit his needs."

That man is just one of hundreds of homeless people in Humboldt County whom service providers are struggling to get warm, safe and sheltered. According to the most recent point-in-time count, there are 364 fewer shelter beds than there are homeless men, women and children in Humboldt County. One of the suggested methods of addressing this, brought before the Board of Supervisors on Jan. 9, is to declare a shelter crisis and/or form a task force addressing homelessness.

After a very long and spirited discussion with copious public comment, the board agreed to form an ad hoc committee consisting of First District Supervisor Rex Bohn and Second District Supervisor Estelle Fennell to explore and present on these options. On Feb. 6, Bohn and Fennell returned to the forum with a rather anticlimactic recommendation: Form another committee, this one focused on affordable housing trust fund expenditures. (A draft version of a shelter crisis declaration was also put forward but Bohn and Fennell were lukewarm on the idea.) It will be several weeks before the board sees and votes on a finalized draft of either the declaration or the committee. In the meantime, local homeless and housing advocates continue to work on a problem that has stymied cities up and down the West Coast.

The discussion of how to address the immediate need of the homeless and vulnerable in Humboldt County seemed to be gaining ground in November, when Sally Hewitt, senior program manager for the Humboldt County Department of Health and Human Services and co-chair of the Humboldt Housing and Homeless Coalition (HHHC), announced that there was a small pool of money to help create a 24-7, low-barrier emergency shelter, setting a goal start date of Dec. 1. Committee members from a wide spectrum of fields, including faith groups, law enforcement and various nonprofits pitched in to suggest potential sites and services. But the plan ran aground as one site after another was vetoed due to lack of accessibility, rejection from landlords or expense. As the Journal went to print, Hewitt responded to a request for comment by saying that a new, promising location had been identified and was being evaluated. A shelter crisis declaration could potentially free up land previously off-limits due to zoning restrictions, although its usefulness in this matter is dependent on what language the board may opt to include if it passes the declaration.

"People are saying, 'declare a crisis,' but what does that really mean?" Fourth District Supervisor Virginia Bass mused at the Jan. 9 meeting. "There's a lot that needs to be considered."

"People are saying, 'declare a crisis,' but what does that really mean?" — Virginia Bass, Jan. 9. tweet this

Hewitt, responding to questions from the board, said the declaration of a crisis could, at the very least, underscore what's evident to the naked eye of everyone living in or driving through the county.

"The reality is, everywhere you look there are homeless people," she told the board, adding that 58 percent of all homeless people in the county had "no shelter at all" and 47 percent were chronically homeless, meaning they had been continuously homeless for more than a year.

Darlene Spoor, executive director of Arcata House, added that a great deal of those seeking services are in grave physical health.

"We get at least two calls a week [from hospitals or care providers] saying, 'We cannot release this person to the streets or they will die,'" she told the board.

In the most recent meeting of the HHHC on Feb. 1, which was dedicated to updating the Department of Health and Human Services' "10 Year Plan to End Homelessness" so it would qualify for state funding, committee members discussed the challenges of housing our large and diverse population of homeless people. There is, they agreed "no one-size-fits-all," solution. Some clients are legally blind, in wheelchairs or struggling with chronic health conditions. Some have partners. Others have pets. Many have addiction issues. Of the clients who qualify for some sort of assistance, almost none qualify for enough to pay market-rate rent. Of those who can afford a place to live, many have eviction histories that make rental companies pass them by. 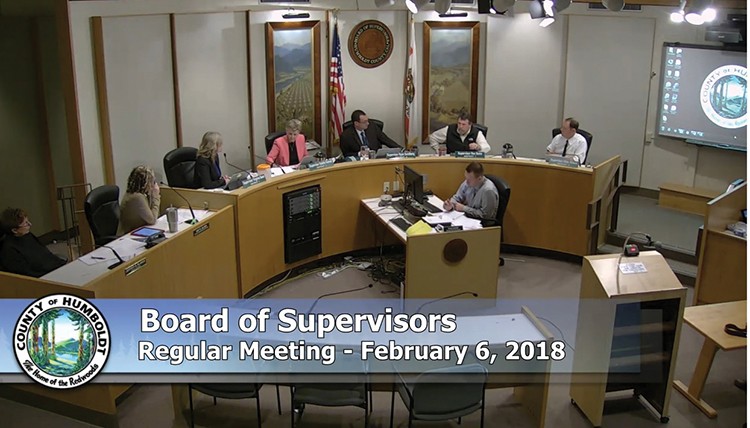 At the Feb. 6 meeting of the Board of Supervisors, Lynette Mullen, homeless services manager for the Eureka Police Department, spoke during public comment to say that wraparound strategies for those housed were essential.

"Housing First is absolutely the strategy but it will need more than that," she said.

Fennell, rolling out the idea of a committee that would investigate funding sources for affordable housing, emphasized that the county had already committed to a Housing First strategy as recommended by Focus Strategies, and there were sufficient state tools in place for such a committee to implement creative solutions.

"I have concerns about shelter crisis declaration," Fennell said, adding that, "the majority of the homeless are within the Eureka city limits and the city of Eureka has already declared a crisis."

"The majority of the homeless are within the Eureka city limits and the city of Eureka has already declared a crisis." — Estelle Fennell, Feb. 6. tweet this

Bohn said he was concerned that an ersatz shelter on public land, one of the potential outcomes of a shelter crisis declaration, might put the county into conflict with the Americans with Disabilities Act. The county has already come under fire for its non-compliance with ADA restrictions. Bohn emphasized the importance of private citizens, faith groups and non-governmental organizations working to address homelessness.

"I got a lot done before I got elected," he said, calling the rules and regulations associated with government work an "anchor on your butt."

"I think the only way we're going to do it is by working with the private sector," Bohn went on. "We might have to work with the big nasty developers. That's who gets it done, the DANCOs and the Strombecks. Nobody came in here with the tool belt today. We're looking to Sacramento for help but they have 30 to 40 people camping on the Capitol lawn every night."

Public comment on the issue lasted approximately a half hour, with 12 people speaking. Several charged the ad hoc committee with being un-responsive to the original request, which was to declare a shelter crisis and authorize a task force.

Bass and Third District Supervisor Mike Wilson expressed some support for both the suggestion of a committee and a shelter crisis declaration, although they asked that the final version of the shelter crisis declaration come back before them with a modified timeframe, as the original draft scheduled the crisis declaration to expire June 1. Wilson also asked for some specific language to be added to the committee draft resolution that would go beyond seeking funding and into more specific efforts. He said he may have to vote no because the language, as written, "did not go far enough."

Fifth District Supervisor and board Chair Ryan Sundberg referenced a recent incident in his district in which a woman and a barefoot child were found sleeping on top of a "pile of trash" in a parked vehicle.

"I hope people realize we care about this issue," he said.

"We've got an opioid problem. We've got a marijuana problem. We got problems up our ass. We've got to have people willing to step up." — Rex Bohn, Feb. 6. tweet this

Bohn said he understood the passion for a shelter crisis declaration but he "wasn't there yet," saying that he was concerned about sound implementation.

"I know we've got a housing problem," he told those assembled. "We've got an opioid problem. We've got a marijuana problem. We got problems up our ass. We've got to have people willing to step up."

Hewitt and others, however, seem optimistic. While the board did not endorse a shelter crisis or present an immediate solution, there are still options on the table.

"I believe we are on track to having multiple solutions available to end homelessness in Humboldt County," Hewitt told the Journal.

Linda Stansberry is a staff writer at the  Journal. Reach her at 442-1400, extension 317, or linda@northcoastjournal.com. Follow her on Twitter @LCStansberry.