Trail Lovers Invited to Chime In About Bay Trail Progress 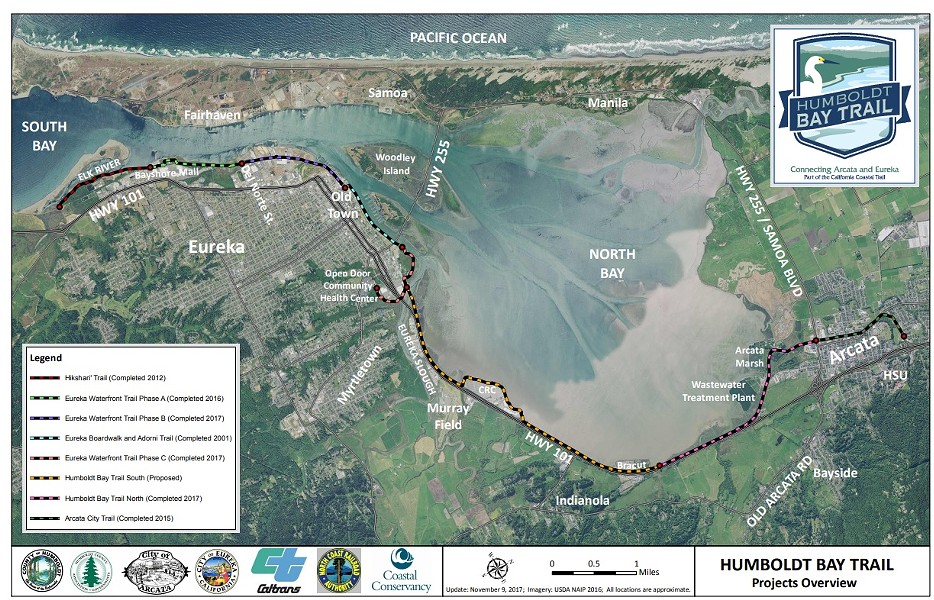 It's shaping up to be quite a month for trail advocates. If you're a biker, a hiker, a dog walker or stroller-pusher, you've probably already gotten out and enjoyed the completed portions of the Waterfront Trail, which currently stretches (in Eureka) from the Hikshari' Trail all the way along the waterfront to down behind Target, looping to meet the Open Door Community Health Center on Tydd Street.

A formal ribbon-cutting ceremony for the Eureka portion of the trail was held on Tuesday and Eureka Community Services (formerly Parks and Recreation) will be screening a documentary at the Wharfinger Building about the challenging and controversial process of putting a trail through the PalCo Marsh on Saturday evening. For some long read reporting on that process, check out last year's two-part coverage, found here and here.

And if you're hitting the trail from the north, you may have biked through the Arcata Marsh and along the west side of the Highway 101 safety corridor only to come face to face with a sign that says "End of Trail" just a little north of Bracut. For the time being, you'll have to fall back on hitting the shoulder of the Safety Corridor, which is nobody's idea of fun. For some backstory on the challenges of (safely) sharing the road, we recommend this 2015 series by Journal contributor and reluctant bike commuter Jennifer Savage.

How long will Eureka and Arcata remain unlinked? Well, that's a good question. The county is asking folks to get together at the end of the month to look at its current plans to pave the final 4.2 miles between the two trail systems. This meeting will satisfy the need for public comment on the plan's compliance with the California Environmental Quality Act. According to a press release, this will also be a chance for attendees to learn about "challenges and constraints" to the trail's completion, which might include the relatively narrow land on which they have to build the trail adjacent to the current railroad tracks, and accounting for the issue of sea level rise.

The County of Humboldt will hold a public meeting on Tuesday, February 27, from 5:30 to 7 pm at the Wharfinger Building in Eureka to discuss the plan to complete the Humboldt Bay Trail between Eureka and Arcata. The community is invited to see the current project design, learn about the strategy for completion, and provide suggestions for improvements.

Humboldt County is leading the development of the “Humboldt Bay Trail South” project to construct the 4.2-mile link between the two trail projects recently completed by the cities of Arcata and Eureka. In addition to serving the region’s transportation needs, the Humboldt Bay Trail will enhance recreational use and enjoyment around the bay.

Attendees at the meeting will be able to see how the current project design fits within the Highway 101 and railroad transportation corridor. In addition, attendees will learn about how challenges and constraints are being addressed, the steps that lie ahead, and opportunities to help make the project successful.

The meeting will begin with an informal open house at 5:30 pm to view exhibits of the current design and talk with planners and engineers. The main presentation will start at 6:00 pm, followed by a question-and-answer and listening session. Humboldt County is interested to receive feedback from community members on the current design plan. The public will also be invited to review and comment on the environmental study report that was developed for compliance with the California Environmental Quality Act.

“As we design the next segment of the Humboldt Bay Trail, we want to be responsive to community needs and sensitive to the context of the project area,” said Hank Seemann, Humboldt County Public Works Deputy-Director. “We’re committed to designing the project in a way that integrates with adjacent land use, minimizes environmental impacts, meets transportation safety goals, and maintains resilience to flooding hazards and sea level rise. We also understand the desire to complete the connection between Eureka and Arcata as soon as possible. This is a major infrastructure project and we’re working hard to complete the various phases of the project development process.”