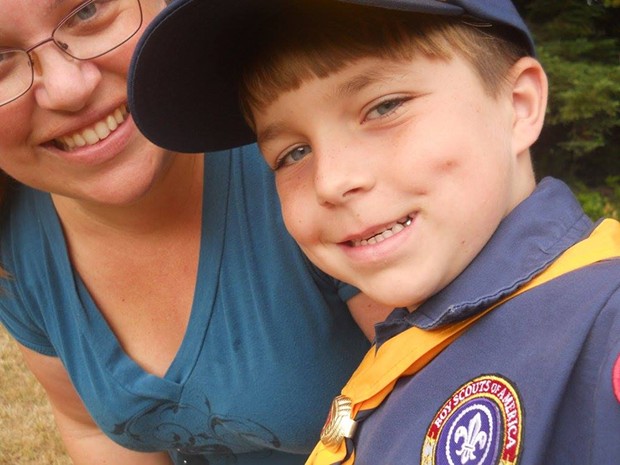 Eight-year-old Eureka Cub Scout Noah Coulombe loves participating in his pack’s annual popcorn sales project. He enjoys both making the sales and carefully tracking of his progress toward his goals. He also enjoys supporting his pack in their fundraising efforts.

Noah was one of his pack’s top salesmen in 2016, when he pulled in $1,175, and was well on his way to the top spot in 2017, so far ahead in his sales efforts that he increased his goal to $3,000. Noah spent his days and evenings making sales and carefully keeping track of his receipts and his progress when the unexpected happened.

On Sept. 18, a family “friend” who Noah’s mother, Megan Tyler, hadn’t seen in more than a year showed up for an unexpected visit. Just to be kind, Tyler opened her home to the friend, allowing him to sleep on her couch. The next day, the friend was involved in an accident in which he hurt his back, requiring surgery, which extended his stay for a week.

At the end of the week, when Tyler and her family returned home one evening, the friend was gone, along with Noah’s popcorn sales money, which was clearly marked as such on the envelope it was in.

“I can’t imagine anyone being so callous that they would steal money from a child, much less money that he or she had worked so hard to collect for their troop or pack, but that’s precisely what happened,” Tyler explained. “I was devastated when I found that the money was missing, especially since it was in an envelope that was clearly marked with what it was for.”

The Search Begins
Tyler quickly got on the phone in her effort to locate the friend in an effort to get the money returned, with no luck. “I’m not sure what I expected but I was so shocked that someone I knew would do something like this, that I knew I had to do something,” Tyler said. “What hurt worst of all was having to explain to Noah what had happened. When I did, he was distraught. Not only was he out all of the money he had earned, but he also realized that this would cause him to not meet his sales goal.”

As a single mother, Tyler lives on a tight budget, so she and her children immediately went through the house looking for things they could sell to replace the stolen money. After selling what they could, there still wasn’t enough to return the full amount.

“We’re a Scouting family,” Tyler explained. “Everyone in our family is involved in Scouting in some way. Noah is a Cub Scout. His older sister is a Girl Scout. I am a den leader. And my younger son will soon be old enough to join Tiger Cubs, which he is looking forward to. To have something happen like this theft was something all of us were having trouble dealing with, until that knock at the door.”

"We're a Scouting family. Everyone in our family is involved in Scouting in some way. Noah is a Cub Scout. His older sister is a Girl Scout. I am a den leader. Any my younger son will soon be old enough to join Tiger Cubs, which he is looking forward to." tweet this
A Knock at the Door
Just a few days later, one of Tyler’s neighbors knocked on her door to tell her of a phone call he had received. The call was from a stranger named Andy Moe, a firefighter who lives in Washington state.

“Andy told my neighbor that he was calling after he found a check that my neighbor had written to Noah for Cub Scout popcorn,” Tyler said. “Then my neighbor passed Andy’s phone number to me and I called him as soon as I closed the door.”

Moe explained that he had recently been to Redding on vacation with his family. They had spent the night in a hotel and when they went to the parking lot the next morning, his truck was gone.

The Redding Police Department quickly located the truck in the parking lot of a nearby casino. Among the items found inside was an envelope with the word “Cubs” written on the outside. It held a couple of personal checks but the cash was gone.

Moe quickly started calling the numbers on the checks to track down their owners in an effort to get more information about the person who owned the envelope and possibly even to find the person who had stolen his truck.

When Tyler called Moe, she explained the situation and gave him information about the family “friend.” They never discussed replacement of the missing money.

A Letter in the Mail
On Nov. 14, just when Tyler thought the situation was over, she opened her mailbox to find an envelope from Moe inside. Opening the letter, she found the envelope that had contained Noah’s money right along with a money order made out to Noah’s pack. Also in the letter was a note that said, “Hope this helps.”

“I was absolutely shocked when I opened that letter and found the money that Andy had raised to replace Noah’s lost cash,” she said. “Just when you think that you can’t rely on strangers anymore, and there isn’t anybody good left in the world, something like this happens to totally restore your faith in people. I’m still shaking my head when I think about all of this.”

“Just when you think that you can’t rely on strangers anymore, and there isn’t anybody good left in the world, something like this happens to totally restore your faith in people. I’m still shaking my head when I think about all of this.” tweet this
The Kindness of Strangers
Moe, a firefighter with the Central Pierce Fire Department in Puyallup, Washington, was never a Scout but when he learned the story behind the missing money, he knew that someone had to step up and do the right thing.

“Of course, when I got my truck back, the first thing I wanted to know was who had stolen it,” he explained. “When I found the envelope with the checks inside, I knew there must be something more to this. That’s when I started calling around to see who the envelope belonged to. Fortunately, I found Megan, and got the whole story. As far as replacing the funds was concerned, that was just a matter of doing the right thing. Putting together a little cash to help somebody out is easy when you work with the kindest, most generous people imaginable. After I heard the story of what had happened, I just asked my friends at the station for their help, and they ponied right up to help out.”

“We are dumbfounded and extremely grateful to the thoughtfulness and generosity of this man and his friends,” Tyler said. “I cannot think of any way to thank him and show the enormity of our appreciation. If there was such a thing as a ‘Good Samaritan Award,’ I would like to nominate Andy and his friends. Their kindness came so out of the blue that it’s amazing.”

Thanks to one stranger’s kindness, Noah loves popcorn sales season once again and is looking forward to supporting his pack next year. As top salesman, of course.

Michael W. Michelsen Jr. is a freelance journalist living in Riverside. He loves popcorn and Cub Scouts but could do without thieves. He wrote this story because he can identify with trying to sell a lot of things on his way to becoming an Eagle Scout.