Bekah on the Hill 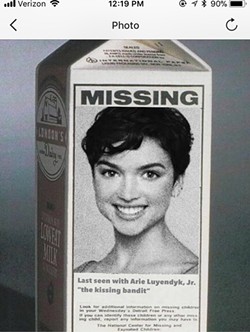 Hours after her elimination from the show shocked Bachelor nation, Rebekah Martinez did an interview with Jimmy Kimmel last night and “set the record” straight as to how she wound up on the California Attorney General’s missing persons database.

Martinez grabbed international headlines earlier this month after the Journal, with the help of a careful reader, recognized Martinez in a slideshow of missing persons as being the burgeoning reality television star who has been captivating audiences since she began vying for Arie’s love when this season premiered Jan. 1.

In the brief interview with Kimmel, Martinez explained that after her elimination from the show during filming last year that — despite the speculation — she had not lied to her mother when she told her on Nov. 12 she was headed to work on a marijuana farm near Eureka.

“I just decided to go to the mountains with my friends for a couple of weeks and I was there for six or seven days without phone service, which I thought I was going to have phone service and I told my mother that I would,” she said. Her mom reported her missing about six days later and the report still had not been cleared when the show began airing in January, setting up the surreal series of events that followed.


You can check out the full interview embedded above, in which Kimmel seems to have a lot of fun with the "weed farm" angle of the story and the 22-year-old self-described “nanny” from Los Angeles takes it in stride. Read more about Martinez’s case and Humboldt County’s high rates of missing persons cases here.