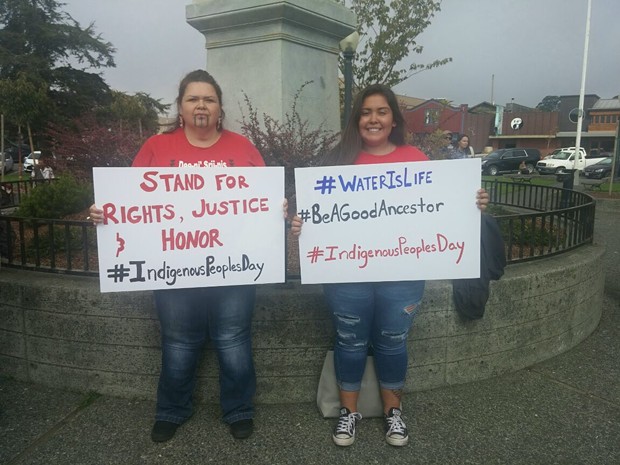 Referring to U.S. President William McKinley's legacy of annexing indigenous lands within the continental United States and Hawaii, the Wiyot Tribe sent out a press release today in support of removing the McKinley statue from the Arcata Plaza. According to the release, the Wiyot Tribal Council voted unanimously Feb. 12 to support its removal, as well as that of a plaque on the nearby Jacoby Storehouse that refers euphemistically to "Indian trouble." The vote came in response to a request from the Arcata City Council, the Seventh Generation Fund and private citizens to weigh in on the issue.

The issue is set to go before the Arcata City Council again Feb. 21, following months of debate over whether or not to remove the landmark, which was placed on the plaza in 1906. Critics, citing McKinley's colonialist ambitions in the Spanish American War, have suggested a number of alternatives to the statue, which was erected during a period of national mourning after the 25th president's assassination. Suggestions have included a statue of the Virgin Mary, a Kinetic Sculpture and a statue-less gazebo or music pavilion. The Wiyot Tribe voted "to support replacement of the statue and plaque with something that represents Wiyot culture and/history."

You can read last year's cover story on the issue here.

From the Wiyot Tribe:

While William McKinley was the 25th president of the United States, he had no local connection with Humboldt County or the City of Arcata. The eight-foot-tall bronze statue was a gift to the city of Arcata from local businessman George Zehnder in the early 1900’s. The Wiyot Tribe would like to acknowledge McKinley’s impact on Indigenous communities. McKinley supported the Dawes Commission, dismantling the Choctaw, Creek, Chickasaw, Seminole and Cherokee Tribal lands; checker boarding them into individual land allotments and designating “Surplus” lands and opening them up to white settlement. After failing to negotiate a treaty with the Aboriginal people of Hawaii, who were against annexation, McKinley was able to annex the State of Hawaii through a joint resolution of Congress calling it, “Manifest Destiny.” McKinley also refused to act when Leech Lake Ojibwe leaders petitioned him to intervene when Timber Companies encroached on Tribal lands to set grass fires and remove Timber from Tribal lands that the Ojibwe used for subsistence.