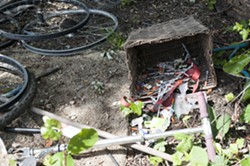 The Eureka City Council is expected to vote on an ordinance Tuesday that may offer more oversight of syringe exchange programs within city limits. Syringe or needle exchange has become a hot button issue in recent months, with some residents blaming the harm reduction programs for large amounts of discarded needles on public property.  (A Journal analysis in October found that about 7,000 needles go unaccounted for each month. Read more here.)

Bill No. 950-C.S., titled the Syringe Management Ordinance, is intended to provide "a degree of local control over Syringe Exchange Programs-SEPs," according to the language on the agenda summary, which was prepared by City Manager Greg Sparks.

Responding to an email from the Journal, Sparks said the ordinance came in part from a request from Councilmember Kim Bergel that the city research and bring some regulatory ordinance on SEPs several months ago.

"Early on our focus was on stakeholder meetings that were geared toward problem solving," Sparks said. "We prioritized the ordinance as part of the overall strategy of reducing needle waste in the past two months. Public concern over this issue has grown over the past six months in particular."

The ordinance requires Syringe Exchange Programs to provide reports to the city on how many needles were distributed and returned, to provide referrals to substance abuse treatment and to participate in weekly cleanups. A full text of the ordinance can be found here.

The ordinance also mandates that syringe exchange programs not operate within 1,000 feet of schools and maintain a disposal program that does not use city or county sharps kiosks. Sparks says this is a standard requirement for certified SEPs and other syringe providers, adding that the Humboldt Area Center for Harm Reduction, one of the more visible SEPs, is not at the center of that controversy.

"This is not an issue for HACHR," Sparks said. "They properly dispose of their collected waste."

Asked why the city did not attempt a 1-1 exchange model that has been called for during public comment, the city manager said the city was following the best practices recommended by the California Department of Public Health.

"They recommend needs-based exchange and that variations or restrictions on needs-based result in higher levels of unsafe disposal," Sparks said in his email. "They recommend improving access to safe disposal, such as what the county has approved with the kiosks and improving hours of operation for SEPs. We (EPD, Code Enforcement, myself) are working with HACHR and Public Health — who operate exchange programs, as well as [Humboldt Waste Management Authority], Open Door Clinic, and St. Joseph on solutions."

With so many needles pointing toward a very deep and pervasive public health problem, the city seems to be steadfast in its commitment to supporting needle exchange programs, which have been shown to be effective reducing the deaths of injection drug users. The beginning of the ordinance reiterates this commitment, stating:

"The City of Eureka supports the concept of harm reduction through
hypodermic syringe exchange as a benefit to the health threat incurred by spreading disease such as HIV and Hepatitis C through the sharing of needles during drug use."

The City Council is due to meet Tuesday, Mar. 6 at 6 p.m. Other agenda items include a mid-year budget review, the invitation of two new cannabis retail facilities to apply for cannabis use permits and letters of support for Assembly Bill 1775 and Senate Bill  834, which seek to prevent oil drilling off California coasts.