The Jacoby Building plaque has been removed from its place on the plaza two weeks after the Arcata City Council voted unanimously that a replacement was needed.

City Manager Karen Diemer said crews were able to remove the marker that denotes the structure’s status as a California Registered Historic Landmark, which includes the affronting wording that "it served periodically as a refuge in time of Indian troubles."

Because there were concerns that the plaque — dedicated in 1963 — might not come off easily, city workers had considered moving the entire  boulder from the plaza yesterday to complete the task but that wasn't necessary in the end. 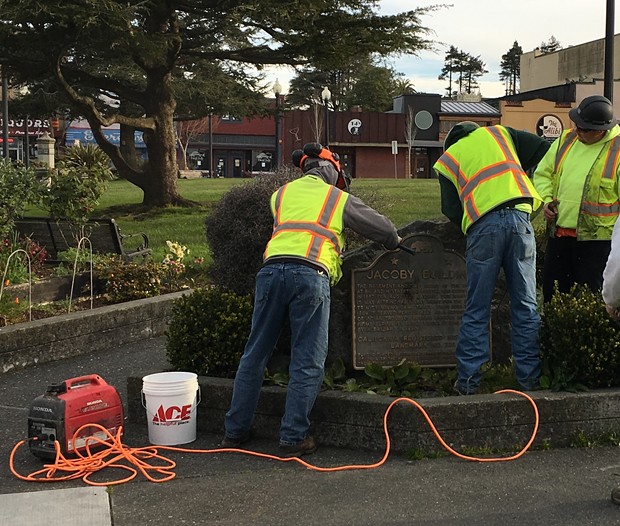 “It all just went really smooth,” Diemer said, adding there had been fears the rock would need to be cracked to remove the metal plate.

The building’s current owner Bill Chino has volunteered to help pay for the replacement’s estimated $4,000 price tag and work with a group to come up with new wording that will need State Office of Historic Preservation approval.

Now, the boulder is back and prepped and ready to go whenever the new plaque is  complete, Diemer said.

More controversial was the council's decision at the same meeting to take down the statue of President William McKinley from the granite pedestal where the tribute to the slain president has stood at the plaza's center since 1906.

Editor's note: This story has been updates to note the boulder's removal was not needed in the end.