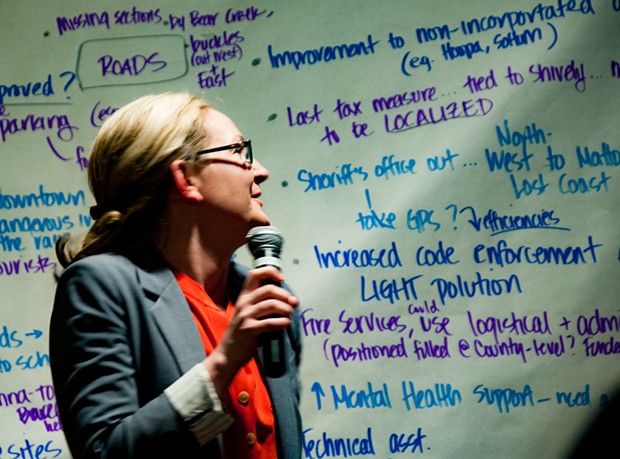 By 6 p.m. yesterday, the overflow audience at the southern version of the Humboldt County Budget Roadshow meeting at the historic Benbow Inn just south of Garberville clogged the doorway and lined the walls.

By the end of the event, a long swath of paper covered with suggestions spread across the front wall of the room. Fix the county roads, clean up “drug dens,” tow away abandoned cars and put the county building code online were among the suggestions. Others included using Measure S money, which is mainly collected from the rural parts of the county, to improve unincorporated areas, encourage canna-tourism and fix critical infrastructure, such as the Garberville Vet’s Hall. 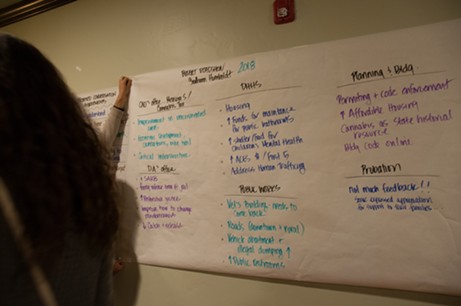 This was the second in a series of meetings officials are holding throughout the county. Local government invited residents to a fast-paced budget meeting designed to quickly find out what county services are working and what ones need improvement.


Residents could choose two department heads to meet with as part of a small group. There, face to face with decision makers, they could urge their concerns be addressed. 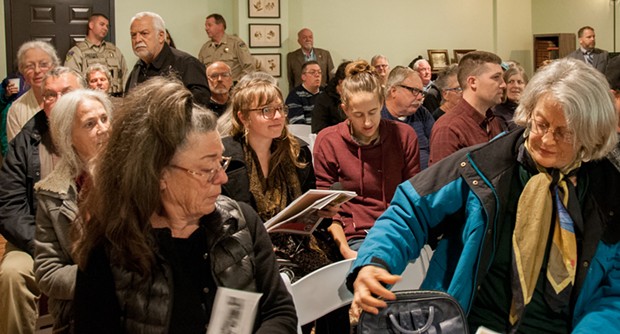 The issues that got the most support would be brought back to a final group meeting to get a look at a “short and spicy” summary of what was deemed important. Then, the final results of the meetings would help county supervisors decide where to allocate money in the next budget.

Two of Southern Humboldt’s organizations met beforehand and worked together to get their message amplified at the meeting. The Southern Humboldt Chamber of Commerce and Southern Humboldt Business and Visitors Bureau met ahead of time and decided what issues needed the most attention. Then a few members of the organizations visited the various groups making sure to focus attention on abandoned vehicle abatement and getting money for critical infrastructure repairs, such as roads.

Getting rid of abandoned vehicles was one of the most consistently brought up concerns among meeting-goers. Sheriff Billy Honsal acknowledged the county had a problem in this area.

He told the gathered crowd at the end of the meeting that the county program had failed not from lack of money but from lack of manpower. He said plans were in the works to fix the issue. 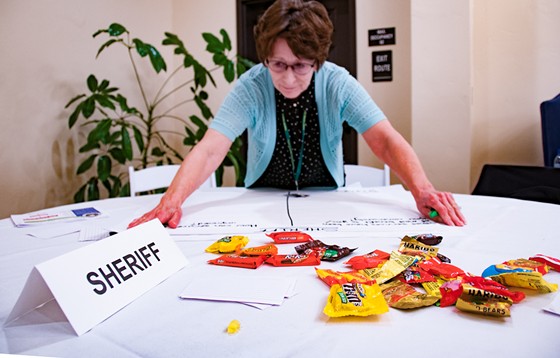 The sheriff’s office was praised for stepping up coverage in Southern Humboldt by many of those who spoke. But, the department was also urged to provide even more coverage and have officers located in the area 24/7. In addition, those at the meeting requested more enforcement on what one resident called “drug dens” — motels being used as a base for dealing hard drugs.

The head of public works, Tom Mattson, reported that fixing and reopening the Garberville Vet’s Building which was recently closed because of mold issues was a priority, also having public restrooms was another important issues and, of course, vehicle abatement and road issues were of concern.

Other concerns were having more funds available for economic development in the Southern Humboldt area — specifically to develop canna-tourism — and money to address human trafficking.