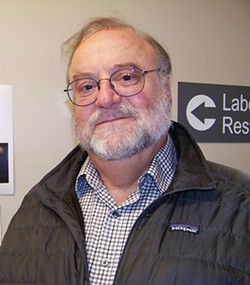 UPDATE: A press release from Open Door confirms that Spetzler died "unexpectedly and peacefully" Sunday night and that his wife, Cheyenne Spetzler, has been named interim CEO. The full press release can be found at the bottom of this post.

Herrmann Spetzler, executive director of Open Door Community Health, died Sunday night of an unknown cause. He was 70. The news was announced this morning via an email to Open Door employees.

Steve Engle, compliance officer for Open Door's administrative branch, confirmed this morning that the organization was reeling from the loss.

"Herrmann was a very dynamic individual with a very large vision for community health," said Engle, adding that a formal statement would be forthcoming. "He was extremely passionate about making sure the community got the care it deserved."

Spetzler took the helm of Open Door in 1977, when it was a volunteer-run clinic in Arcata. Under his tenure, the organization grew to 10 clinics in Humboldt and Del Norte counties, serving an estimated one third of the region's population and providing dental, medical and mental health care. Spetzler saw the organization through several rounds of growing pains, including a challenge by lawyer Jason Singleton regarding the clinics' ADA accessibility, a decision by the state in 2009 to eliminate MediCal funding for dental care in the wake of a financial recession and then the expansion of services after the 2010 passage of the Affordable Care Act, which saw a budget windfall for the organization that allowed it to expand into more rural communities.


Spetzler also served on numerous boards and committees, founding the California State Rural Health Association, and co-founding the California Primary Care Association. Spetzler also helped create the Telehealth and Visiting Specialist Center, which utilized technology to reach people in more remote areas. Spetzler, who graduated from Humboldt State University with a masters in administration in 1987, was also conferred an honorary degree by the university as a doctor of humane letters in 2014. In its announcement, HSU referred to Spetzler's "enduring and extraordinary impact on North Coast rural health care."

Open Door has yet to send out a formal announcement of Spetzler's passing but. as the people continue to learn of his death, it's clear that he touched many.

"He was an amazing man who had a great vision for our city," said Eureka city councilmember Kim Bergel, recalling Spetzler's work with the council on homelessness and addiction. "He wasn't afraid of outside-the-box thinking."

Herrmann Spetzler died unexpectedly and peacefully on Sunday at his home on Greenwood Heights. As the Chief Executive Officer of Open Door Community Health Centers (ODCHC) for more than 40 years, he was a driving force for health care and social justice in Humboldt and Del Norte Counties. He contributed greatly to the regional, state and national discussions of health care and was a leading advocate for Community Health Centers.

Open Door Community Health Center Centers (ODCHC) Board President Kathleen Moxon states “We mourn his passing. The organization is strong and will continue its operations uninterrupted. I have absolute faith in our management team and, as part of our succession plan, have named Cheyenne Spetzler as interim Chief Executive Officer.” Moxon notes, “I am confident that as an organization ODCHC moves ahead without hesitation or disruption.”


Editor's note: This post was updated from a previous version to correct the day of Spetzler's death.