Cool! Eureka Wants You to Create Heatmaps of Chill Spots 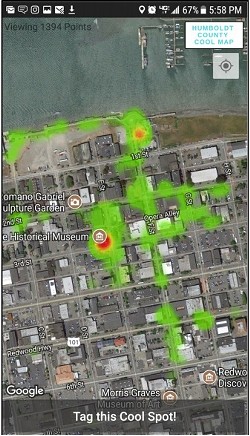 If you caught our cover story a few weeks ago, you might have noticed that Eureka's Community Development staff really loves maps. Whether it's the 1902 map of the city that adorns the wall of Development Director Rob Holmlund's office or the online architecture map developed by the department, which you can find at www.eurekahistory.com, it's all about that grid.

Now Holmlund is introducing a new project at the March 20 Eureka City Council meeting that might get non city planners as excited as maps has his colleagues. Called Cool Maps, the Humboldt County Mobile App will allow users to map "cool" or interesting places in their cities.

Intended to improve economic development, Cool Maps use Google Maps so users can tag places they think are cool. The idea for the app came from associate planner Brian Heaton, who developed it to be used in any city, not just Humboldt County. The report will be received by the council with no action scheduled on Tuesday; the program's development is already included in the city budget.

"The whole idea was to create a really simple app that would allow people to identify places that are cool," says Holmlund. "The only requirement is that you have GPS. It drops a little bit of data right where you are."

Those little votes of confidence will create a "heat map" of cool places, encouraging people to check them out.

"'Cool' places are places that are interesting to humans," the report on the agenda item explains.

So, what makes something cool?

"Determining whether a place is cool or not is an entirely subjective endeavor," the report continues. "This subjectivity is expected and appreciated. HCMP is not a scientific effort."

Eureka staff have already tested a beta version of the app, which is available for download on your smartphone. People who may want to artificially inflate the coolness of a particular place, beware. You have to be onsite, Holmlund says, and there's a limitation on voting: only once per minute.