On Mar. 22 The Humboldt-Del Norte County Cattlemen's Association sent out a press release rebuking Christie, calling the scene "horrific and disturbing" and saying the Christie was not a member of their association. 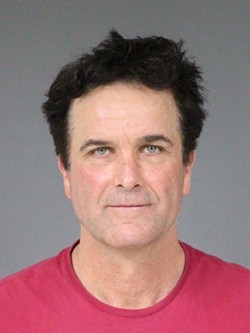 A press release sent out this morning by the Humboldt County Sheriff’s Office confirmed that Raymond Frank Christie was arrested on suspicion of animal cruelty, causing an animal to be cruelly killed, failure to provide proper care to an animal and disposal of a carcass within 150 feet of a state waterway. According to a Humboldt County Sheriff's Office spokesperson, officers served warrants yesterday on four properties across northern Humboldt associated with Christie.

Descriptions of what officers found on Christie's property are grisly, with the HCSO stating observations “validated community complaints that serious violations were taking place.”


According to the press release, investigators found “approximately 250 to 300 deceased cows, some of which Christie had heaped into large piles approximately 10 feet high near an excavator.” Other carcasses were in or near waterways. Large numbers of living cattle where in “small or insufficient corrals.” Many were malnourished.

Humboldt County Animal Control found that Christie’s dogs were allegedly kept in unsanitary conditions, some without water, some without space to move freely, some housed on wire flooring. The dogs were “left in the care of a responsible party.” A plan to care for the remaining livestock is being developed; 179 head of cattle are “on hold for repossession,” pending further investigation.

The California Department of Food and Agriculture allegedly found that many of the cattle had been moved without official ID tags, brought into the state illegally without veterinary inspection or ID tags, or their tags had been removed. Numerous code violations, cannabis permit violations and stream alteration violations were also found. A full press release can be found below. Yesterday’s raid was the result of a five-month investigation. Christie was booked into the Humboldt County Correctional Facility with bail set at $25,000.

The Humboldt County Sheriff's Office arrested Arcata rancher Ray Christie this morning, on suspicion of charges yet to be specified. Christie, 54, is the owner of a ranch near the intersection of Jackson Ranch Road and State Route 255 (Samoa Boulevard).

Samantha Karges, spokesperson for the sheriff's office, said that the raid came after a multi-year investigation initiated by "ongoing complaints" of animal cruelty and reports of dead animals being improperly disposed of near or in waterways. The property is adjacent to several sloughs that drain into Humboldt Bay.

Several agencies assisted in the morning's investigation, including the United States Department of Agriculture, the District Attorney's Office, the Department of Health and Human Services' HazMat unit and Environmental Health division, county code enforcement, the Department of Fish and Wildlife and the Drug Task Force. Karges said the DTF attended in case the officers discovered illegal drug activities such as a cannabis cultivation site, but could not confirm if any such activity was found.

"When we arrived we found numerous dead animals, code violations and fish and wildlife violations," Karges said. "This has been a long-term investigation that culminated in today's operation."

During a five month investigation into large-scale animal cruelty complaints about properties owned by or associated with local rancher Raymond Frank Christie, Humboldt County Sheriff’s deputies observed bovine bones and carcasses in/near waterways, as well as, areas on the properties where cattle were being contained with little to no feed or grass. These observations validated community complaints that serious violations were taking place on the properties.

Five violations of dogs kept in unsanitary conditions
Eight violations of dogs without water
Five violations of inadequate space for dogs to move freely
Four violations of primarily housing a dog on wire flooring
Violations found by the Humboldt County Animal Control were corrected on scene and the dogs were left in the care of a responsible party. The California Department of Food and Agriculture has placed 179 head of cattle on hold for repossession pending further investigation. A plan to care for the remaining livestock owned by Christie is still being developed.

Based on the evidence located, the Humboldt County Sheriff’s Office arrested Christie on the following charges:

Christie was booked into the Humboldt County Correctional Facility with bail set at $25,000.

The California Department of Fish and Wildlife as well as other involved state agencies will be requesting additional charges as this investigation continues.

From the Humboldt-Del Norte Cattlemen's Association:


“The scene described at Mr. Christie’s property is horrific and disturbing. Animal abuse
in all circumstances is indefensible and should never be tolerated. If the alleged
accusations are accurate it is clear a crime was committed. Anyone convicted of these
crimes or any animal abuse should be punished to the greatest extent possible.   While
some may try to use this isolated incident to condemn all ranchers I assure you this is not reflective of how myself or hundreds of other ranchers throughout Humboldt County
raise and care for our animals. We will continue to use our collective voice to condemn
all animal cruelty and continue to promote the highest standards of animal care”.
Ray Christie is not a member of our Humboldt & Del Norte Cattlemen’s Association.
Todd Phelps
President
Humboldt & Del Norte Cattlemen’s Association