Mateel, High Times Create Partnership to Save Reggae on the River 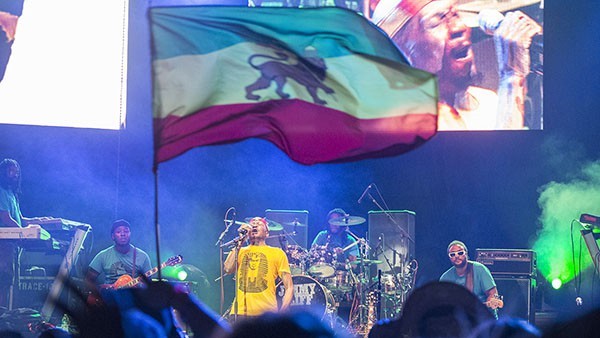 The Mateel Community Center’s board of directors voted last night to approve a partnership with High Times Productions to put on Reggae on the River.

The deal was announced in a press release this morning with few details, other than that the production company, the event-management arm of High Times Media, will “assume responsibility for the upcoming festival’s talent lineup, marketing and monetization efforts.” In the release, Mateel Board President Garth Epling says the partnership will give the Mateel “the resources to continue growing and developing the festival.”

A story on www.kymkemp.com that posted last night notes that the deal has been in negotiations for six months.

The Mateel has been in desperate financial straits since reporting that last year’s festival lost $140,000, leaving the center facing a $430,000 budget deficit. Coupled with an additional $140,000 in outstanding debt, that left the Mateel pondering bankruptcy protection options as recently as January.

The declining Reggae on the River attendance has been blamed on everything from sub-par musical lineups, a disconnect between the Mateel, the festival and the local community and the economic downturn spurred by declining black market cannabis prices and the added costs of permitted farmers coming into compliance.

Details of the new partnership have yet to be released so it’s hard to tell what this means for the August reggae festival or the financial health of the Mateel. But according to the press release, High Times is viewing the partnership as a win, noting that it “marks an important step for High Times Productions to manage a broader music event not explicitly tied to the legal cannabis industry.”

Here's the press release announcing the partnership, as posted on www.reggaeville.com.

High Times Productions, the event-management team for High Times Media, today announced an exclusive partnership with the Mateel Community Center to breathe new life into the iconic Reggae On The River festival.

High Times will assume all responsibility for the upcoming festival’s talent lineup, marketing, and monetization efforts. The brand will also provide the Mateel Community Center with best practices learned from it’s long and successful production history in an effort to ensure the experience is on par with what the industry has come to expect from it’s premiere brand.

“Reggae on the River is a beloved institution in the Northern California music and countercultural scene, and a natural fit for High Times,” said Adam Levin, CEO of High Times Media. “We already operate numerous music and lifestyle events across three continents and see Reggae on the River as an extraordinary addition to the amazing experiences we curate annually for tens of thousands of fans.”

The festival has been connected since 1984 to the Mateel Community Center in Redway, and held on land controlled by the Arthur family. Originally, it was a one-day musical event to raise money to replace Mateel’s hall, which had been destroyed in a fire.

"Under the new partnership with High Times, the center will have the resources to continue growing and developing the festival", said Garth Epling, the MCC Board President.

“Reggae on the River has been a treasured part of Northern California’s cultural scene for decades, and Mateel’s board has been committed to finding a long-term, sustainable partnership to ensure the festival thrives for years to come,” Epling said. “This High Times partnership ensures that Reggae on the River will remain a cornerstone of life in Humboldt county.”

High Times Productions produces a series of Cannabis Cup events annually as well as several other lifestyle and music events tied to High Times magazine, the oldest and best-known brand in the business of legalized marijuana. Given their production chops, knowledge of the landscape, and successful history in both events and media, High Times was the perfect partner for the Mateel Community Center. Reggae On The River marks an important step for High Times Production to manage a broader music event not explicitly tied to the legal cannabis industry, Levin said.

About Reggae on the River:
Reggae on the River is an annual music festival in Northern California, nestled along the south fork of the Eel river amongst the redwood trees. 34 years running, this cultural gathering has grown into North America’s premier live-reggae concert destination. Originally conceived as a fundraiser for the Mateel Community Center, the event has become known from Jamaica to Humboldt as the place to be on the first weekend in August.

About Mateel Community Center:
The Mateel Community Center has fostered the arts in rural Northern California for approximately forty years. Serving as the cultural hub of the Southern Humboldt community, we provide arts, educational, and social service programs, and present a myriad of multicultural musical, theatrical, dance, comedy, film, craft, and rental events- earning our non-profit organization international acclaim. Located in the town of Redway, CA, the Mateel Community Center hall is a showcase of fine woodworking, craftsmanship, and solar design that first opened in 1988. Owned and operated by the MCC, a 501(c)3 non-profit organization, the Center is well utilized by the entire community and serves as a venue for both commercial and non-profit rentals, as well as in-house Mateel productions.

About High Times:
For more than 40 years, High Times has been the authoritative voice of authentic cannabis culture, leading the fight for legalization and empowering the burgeoning industry’s legal entrepreneurs. High Times content spans digital, social, video and print platforms as well as location-based events highlighted by the Cannabis Cup global franchise and the High Times Business Summit conference series.